The National Centers for Coastal Ocean Science (NCCOS) awarded $1.68M (million) in Fiscal Year 2017 funding for nine research projects to identify conditions increasing bloom toxicity, model toxin movement from water into shellfish, fish, and marine mammals, and improve toxin monitoring and forecasts. These multi-year awards from the NCCOS competitive programs, ECOHAB and PCMHAB, with a total funding target of $5.2M through 2019, will have a national impact. 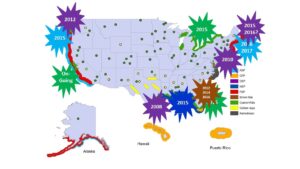 Added Dr. Quay Dortch, ECOHAB and PCMHAB Program Manager, “These projects have clear links to management, for example the ISSC, and their outputs and outcomes will provide managers and the public with sound scientific information for making decisions.”

A list of the awards is available online.  See the NOAA Press Release for more information.