Management actions since the mid-1980s have reduced nutrient inputs to Chesapeake Bay, resulting in a smaller, annual “dead zone” — an area in the bay that lacks the oxygen needed to sustain aquatic life. A new NCCOS-funded study estimates how bad the dead zone would have been these last four decades had nutrient reductions not occurred.

Low oxygen, known as hypoxia, is caused by excess nutrients in the water — primarily nitrogen from land-based agriculture and industry, sectors that have intensified as human population has grown. Too much nitrogen fuels algal blooms that deplete oxygen from the water as the algae die and decompose.

The researchers used modeling, statistics, and observational data to quantify changes in the relationship between riverine discharge and hypoxic volume in the bay from 1985 to 2019. Their study results show that hypoxic volumes in Chesapeake Bay would have been 20 to 120 percent greater for moderate hypoxia (less than 3 mg O2/L) and 30 to 280 percent greater for severe hypoxia (less than 1 mg O2 /L) if nutrient reductions had not occurred. Ranges are large because they cover both wet and dry years from 1985 to 2019.

Modeling also allowed the team to identify which areas have benefited most from nutrient reductions. The most positive outcome is seen in the main channel between the Patuxent and Rappahannock Rivers, where the team estimates that hypoxia would have existed an additional 50 to 90 days each year (for 2016–2019) if nutrient reductions had not occurred. 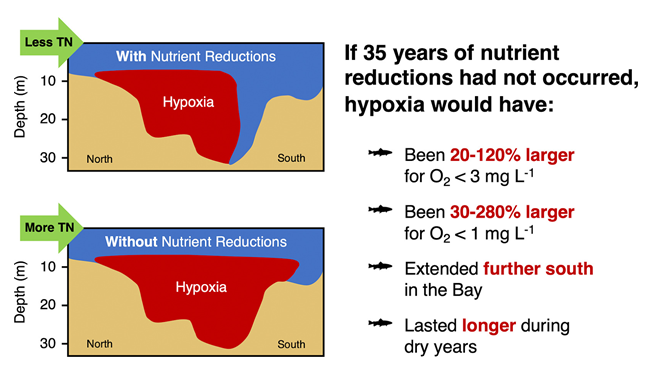 Schematic showing the impacts that nutrient reductions from 1985 to 2019 have had on the size, duration, and length of hypoxia in Chesapeake Bay. Credit: Frankel et al, 2022. 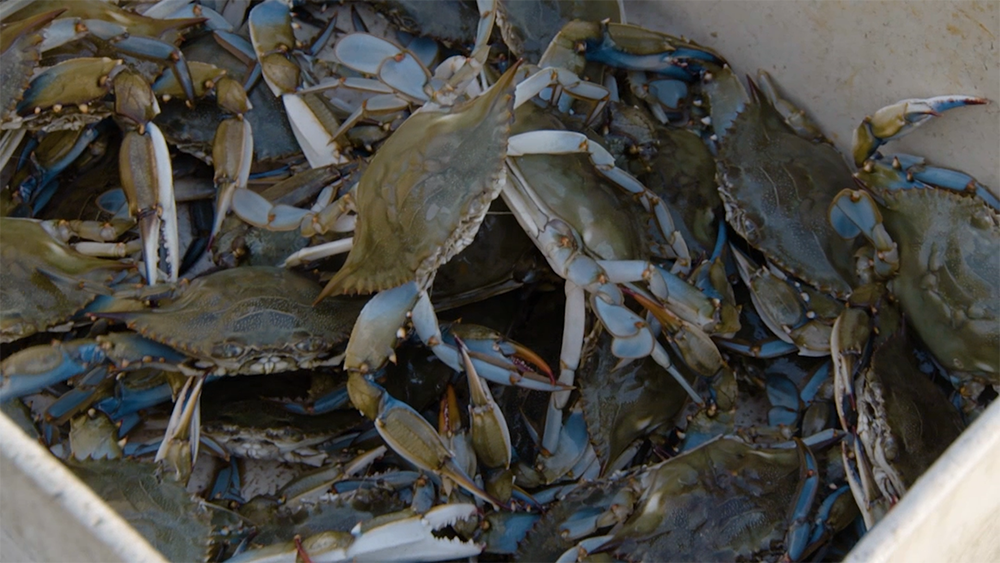 A warming climate has partially counteracted some of these gains, because warmer water holds less oxygen, exacerbating hypoxia. Water temperatures in Chesapeake Bay have increased by roughly 2.5 degrees Fahrenheit in the summer over the past 35 years. The team estimates this warming has offset hypoxia improvements from nitrogen reductions by as much as 34 percent.

While nutrient reductions have been able to outpace the negative effects of rising temperatures, future warming may reverse this trend if adequate nutrient management strategies are not implemented. Natural resource managers and policymakers can use the study’s findings to guide actions that continue to improve water quality in Chesapeake Bay.

The project was led by Marjorie Friedrichs (Virginia Institute of Marine Science) and funded by the NCCOS Coastal Hypoxia Research Program.