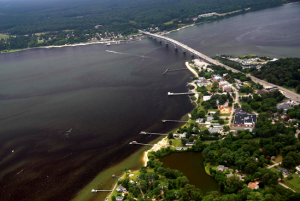 In late July 2016, a bloom of the two harmful algal species expanded, intensified, and covered nearly the entire York River and nearby Mobjack Bay, north of the river mouth. The project team will identify effective strategies oyster growers can use to minimize oyster mortality during future harmful algal bloom events.

Dense blooms of C. polykrikoideshave occurred regularly in Virginia's York River and the lower Chesapeake Bay during late summer for several decades. A. monilatum has bloomed in this region since 2007. Growers are primarily concerned with how these algae are affecting oyster health and survival in the region. The Virginia Institute of Marine Science will share project results with members of the shellfish industry.