Two publications resulting from U.S. Department of Defense-funded research to support ecosystem-based management in coastal military installations have been published in the Journal of Geophysical Research-Biogeosciences. The research was a collaboration between Virginia Institute of Marine Science and NCCOS scientists.

Together, the papers summarize and update current knowledge regarding carbon biogeochemistry in salt marshes. The results inform management efforts to optimize salt marsh primary production and resilience, and to assess how changing nutrient inputs may alter the “Blue Carbon” potential of salt marshes. 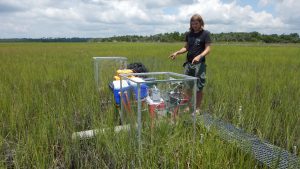 The salt marsh study site installation on Marine Corps Base Camp Lejeune (NC) with lead author Dr. Ken Czapla of VIMS. NCCOS' Dr. Carolyn Currin is a co-author. Salt marshes have very high rates of primary production, and the fate of the carbon produced was the subject of these studies. Credit J. Davis and C. Currin, NOAA NCCOS.

Salt marshes provide valuable services, such as protecting the coast from storms, removing excess nutrient pollution from water, and long‐term burial of carbon. Because sea level is currently rising, salt marshes need to build up elevation using plant debris and sediment deposition at the same rate as sea level rise to survive. If salt marsh platforms do not build elevation faster than the local rate of relative sea level rise, these ecosystems may convert to mudflat or open water.

The first paper describes how salt marsh response to fertilization varies depending on inundation time, proximity to tidal creeks, and biogeochemistry of pore water (water in between particles in marsh sediments). Human‐produced nitrogen pollution is rising in salt marshes, often increasing the growth of grass, which may cause the marsh to trap sediment more efficiently and build elevation faster. However, increased nitrogen may also decrease root growth and increase sediment microbial activity (which decomposes sediment organic carbon to carbon dioxide), causing elevation building to slow down.

Therefore, the addition of nitrogen can affect a marsh's elevation‐building rate in a positive or negative way, depending on the local site conditions.

The researchers found that the effect of nitrogen on elevation‐building depends particularly on hydrology. Factors such as tidal inundation period and porewater residence time influence sediment water chemistry and, thereby, the response to excess nitrogen. Sulfide inhibits the uptake of nitrogen by plant roots and also microbial activity; thus, marsh locations with more sulfide have diminished responses to nitrogen pollution. This knowledge may be used for management of marshes at risk due to nitrogen pollution.

The second paper describes how rates of salt marsh carbon sequestration are impacted by nitrogen inputs and inundation. Salt marsh ecosystems rely on carbon accumulation to increase elevation and survive sea level rise. The amount of carbon accumulated in a marsh is the net result of carbon dioxide emissions to the atmosphere, fixation of carbon by photosynthesis, export of dissolved carbon to the creek, and accumulation of organic carbon in sediments deposited on the surface. 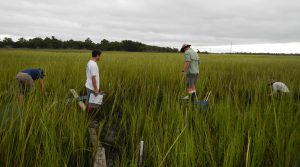 Some of the NOAA project team working in the salt marsh. Credit C. Currin and J. Davis, NOAA NCCOS.

Overall, the marsh gained carbon in the interior but lost carbon on the edge, leading to a loss of about 50,000 kg of carbon per year across the 0.5 square kilometers marsh area. However, under fertilized conditions, Freeman Creek marsh carbon loss increased nearly fivefold overall as a result of the large increase in carbon loss from the edge marsh. It is believed this study is the first mass balance calculation of salt marsh net ecosystem carbon balance on an annual time scale.

This study shows that increasing nitrogen pollution in coastal waters will cause increasing net carbon loss in marshes. 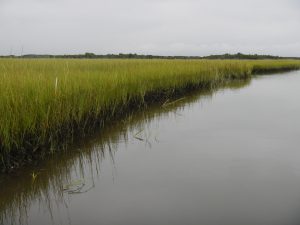 A salt marsh-creek edge at Camp Lejeune. Salt marshes have very high rates of primary production, and the fate of the carbon produced was the subject of these studies. Credit C. Currin and J. Davis, NOAA NCCOS. 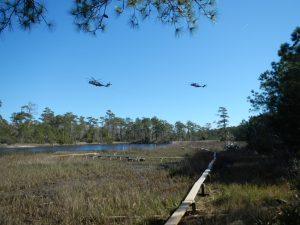