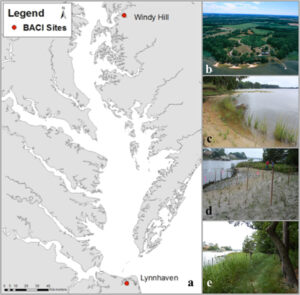 In general, overall results suggested that living shorelines changed the benthic communities that previously had a bulkhead to more closely resemble those in adjacent marshes with no bulkhead, increasing the density and biomass of clams by the second year. Bivalves, like these clams, can be a strong indicator of a healthy ecosystem, further suggesting the benefits of living shorelines. The density and biomass of polychaete worms declined at first, but appeared to begin increasing again by the end of the study.

Overall, the project highlights the benefit of preventing erosion with living shorelines to benthic communities over traditional shoreline hardening techniques.  Ultimately longer-term studies are recommended to identify all of the benefits of livening shorelines.

Learn about other NCCOS work on living shorelines here.