Relatively unknown and taxonomically confusing until the last few decades, the tiny but toxic dinoflagellate, Karlodinium veneficum, can produce dense blooms and fish-killing toxins. K. veneficum is a small chlorophyll-containing dinoflagellate thatproduces a suite of potent toxic compounds known as karlotoxins whichkill fish as well as other organisms. K. veneficum has a mixed nutritional mode (mixotrophy) relying on both photosynthesis and phagotrophy (engulfing/ingesting whole prey) for growth. Karlotoxin production appears to be used primarily for prey capture but grazing deterrence is an additional advantage. Researchers have identified many karlotoxins and considerable strain variation in the types and amounts of toxins produced. 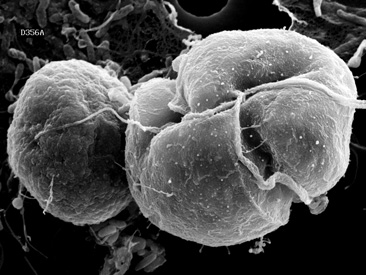 This project will provide coastal managers knowledge and tools to better predict how, when, and why K. veneficum cells (and thus blooms) become highly toxic. With a single sample managers might be able to determine if the K. veneficum bloom is growing or not, with the lack of growth serving as a possible indicator forhigh bloom toxicity soon after the sample was collected.