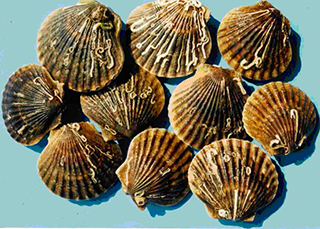 NCCOS-funded researcher Dr. Christopher Gobler and his students recently reported on the nearly complete collapse of hard clam fisheries in Great South Bay and bay scallop fisheries off the East End of Long Island due to annually occurring harmful algal blooms, hypoxia, and acidification. The team discovered excess nitrogen entering groundwater from septic tanks and cesspools around the bay is the cause of many of these water quality impairments.

Gobler and his team shared their latest research findings with over 150 fishermen, baymen, students, citizens, and leaders from U.S. EPA Region 2, the New York Department of Environmental Conservation, and the Town of Southampton during a State of the Bays, 2014 lecture at the State University of New York at Stony Brook.

Gobler started this annual lecture series to showcase socially relevant marine science conducted by the university and to build support for slowing or reversing coastal ecosystem health decline. His research has helped Suffolk County and the broader Long Island coastal region understand the need for and plan for sewerage and septic infrastructure improvements that will capture excess nitrogen and start the recovery of this degraded ecosystem.

Dr. Gobler and his team have been funded by NCCOS MERHAB, ECOHAB, and Ocean Acidification projects.