Lake Erie not only experiences eutrophication caused by runoff-laden phosphorus (P), but also by internal P loading caused by recycling of “legacy” P stored in bottom sediments. This phenomenon was tested experimentally by scientists supported partly by NCCOS. The results show that the transition between slow and fast P flux occurred within 24 hours of anoxia (no oxygen) formation in lake bottom waters and that P flux under oxygenated (oxic) conditions was lower than anoxic P flux rates. The study provides scientific evidence that P management in Lake Erie must include the biogeochemical release of P to control lake hypoxia.

Lake Erie has a history of environmental degradation and past industrial and wastewater runoff led to eutrophication throughout the lake. Although historically once improved, eutrophication has accelerated over past decades due to human activity in the watershed and remains a serious threat. Internal P loading is a potentially important component of a lake's P budget. Internal P loading does not add new P to lakes, but rather recycles legacy sediment P from past external loads that can contribute to and extend hypoxia and anoxia and impact primary production. This stored internal load can amplify the effects of external P loads. Internal P loading from lake sediment contributes to eutrophication, but understanding  this process in Lake Erie is more uncertain than for its riverine P inputs.

A major driver of internal P loading occurs when low dissolved oxygen (DO) creates reduction-oxidation (redox) conditions where electrons  transfer between sediment–water interface compounds. These biogeochemical reactions free inorganic P to flux out of the sediment and back into the water column for algae to utilize. Eutrophication can exacerbate internal P loading because excess growth of algal biomass can fuel increased oxygen consumption at the lake bottom. Decaying organic matter from algal blooms is remineralized by bacteria and integrated into lake sediment, creating a reservoir of nutrients and driving respiration of dissolved oxygen. Under oxic (oxygenated) conditions, iron oxides are powerful sorbents of inorganic P. When DO is absent (anoxia) anaerobic respiring microbes, which thrive under anoxia, respire these oxides and convert them to a soluble form that releases bound inorganic P. This results in internal P flux as inorganic P diffuses into the water column.

Past research studies focused mainly on incubating sediment cores in oxic or anoxic conditions, meaning we know little about sediment flux during transitions from one state to another.

The study mimicked short-term transition between oxic and anoxic states in experimental sediment cores in order to observe and replicate the conditions and rates of P release (flux) in sediments. To complement the study, continuous in situ monitoring in Lake Erie's central basin was performed. Sediment cores at three locations in Lake Erie's central basin were sampled in order to represent differing depositional environments (Figure 1). These coring locations were near instrumented moorings that continuously recorded temperature and dissolved oxygen throughout the water column. 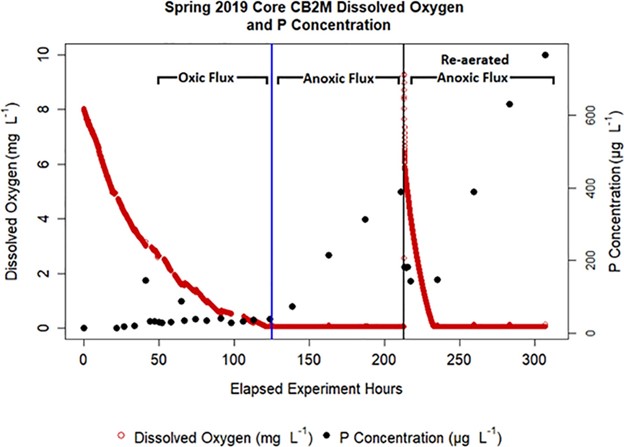 These results show that the accelerated P flux observed is a symptom of anoxia and not hypoxia. The transition between slow and fast P flux occurred within 24 hours of anoxia formation. The study indicates that sediments will not begin accelerated P flux until after anoxia has been established. Overall, the study showed that oxic P flux was lower than anoxic P rates across all seasons, stations, and temperatures (Figure 2).

The findings from this study may represent an underestimation of sediment P flux as some released P may have been in the form of dissolved organic P, which was not measured but can be an important source of P in some systems.

This study has implications for Lake Erie management and monitoring. Internal loading of P has been cited as a major challenge for long-term P removal and management. Monitoring the extent and impact of internal loading will be important as climate change is expected to lengthen the duration of lake bottom water (hypolimnion) stratification. These conditions are expected to lead to increasingly longer periods of hypolimnion anoxia and higher average P flux, both factors that will increase total internal P loads.

These future trends make it vital to try and constrain internal P loading as a function of DO condition and temperature. Expanded and focused monitoring efforts on anoxia and P would help watershed managers and monitoring programs improve estimates of internal loading and track how it responds to reductions in loading from the watershed.

Volunteers gathering mussels not for meals but to gauge health of shoreline waters | HeraldNet.com - Local news