From late April into May 2015 hundreds of diamondback terrapin turtles ( Malaclemys terrapin ) began dying and washing up on beaches in the western part of Long Island, New York. Simultaneously an on-going Alexandrium fundyense bloom occurred. Alexandrium produces a potent neurotoxin, saxitoxin, which is the cause of paralytic shellfish poisoning (PSP). The terrapin tissues were intact and in good condition, and necropsy did not indicate any disease, so PSP was suspected. 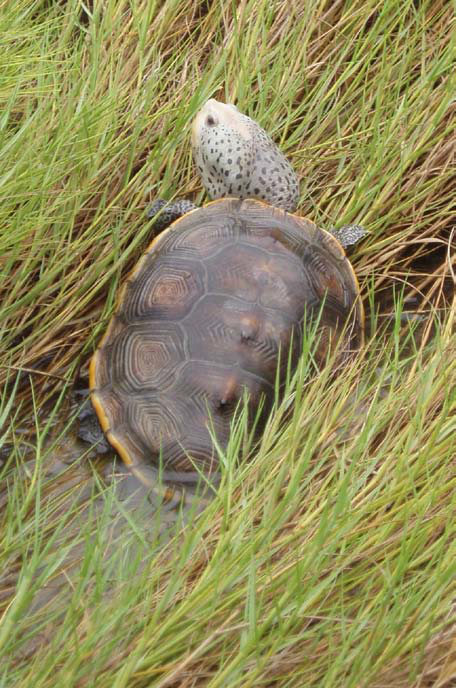 The NCCOS Harmful Algal Bloom Event Response Program provided emergency funding to a group of scientists and managers from Cornell University, New York State Department of Environmental Conservation, Bigelow Laboratory for Ocean Sciences, and Stony Brook University. They collaboratively analyzed different tissues from multiple terrapins to determine if PSP likely caused the die-off and start understanding how saxitoxin affects terrapins. If saxitoxin wasthe likely cause of death, this would be the first recorded terrapin PSP event.

Due to their popularity for stews and soups, diamondback terrapins were once the subject of both commercial harvesting and aquaculture along the East Coast from Massachusetts to Texas. Their populations were depleted in the 20th century due to a combination of consumer demand, drownings in crab traps, and loss of sandy beach nesting sites to shoreline hardening.