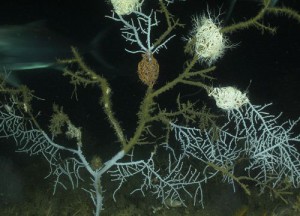 This deteriorating sea fan Hypnogorgia pendula looks like a zombie from the deep, the gorgonian octocoral was located on mesophotic reefs situated below the oil slick of Deepwater Horizon for several weeks in 2010. This image was taken one year after the spill, in 2011. It is an example of the injuries observed in still living "zombie" corals on Pinnacle Trend near Mississippi and Louisiana. Credit: Florida State University

A newstudy in the journalCoral Reefs reveals evidence of injuries to corals attributable to the Deepwater Horizon (DWH) spill on mesophotic reefs up to 109 km from the wellhead, situated below the oil slick for several weeks. The damage extended to coral communities in shallower Gulf waters, up to 67 miles from the wellhead. Researchers from NOAA, USGS, and Florida State University used video and images from remotely operated vehicles (ROVs) to compare the health of corals on hard-bottom reefs in the "mesophotic zone" (100-500 feetbelow the surface) before and after the oil spill.

These reefs, in a region known as "Pinnacle Trend," provideimportant sources of habitat, food, and shelter for various marine lifewhilealso supporting recreational and commercial fishing. Locatedat the edge of the continental shelf off Louisiana, Mississippi, and Alabama, the corals were roughly 200 -300 feet below the surface.Previous DWH spillstudies focused on much deepercoral communities 4,000 feet under the ocean, near the wellhead.

Thesignificant injuries were observed among at least four species of large gorgonian octocorals, or sea fans, andtook the form of overgrowth by hydroids (fuzzy marine invertebrates characteristic of unhealthy corals) and broken or bare branches of coral. To a lesser extent, corals also displayed discoloration, erosion, and loss of limbs. While the health of the injured coralscontinued deteriorating in the fiveyears since the spill, 50 percent of corals on the reefs remained healthy.

For more details, go to the NOAA Office of Response and Restoration website here :