Home > news > How do Light-dependent Mesophotic Corals Survive and Thrive under Low Light?

For light-dependent marine plants and animals, light is a critical factor for food, growth, and reproduction. Many hard corals contain symbiotic single-celled photosynthetic algae in their tissues called zooxanthellae. These algae, Symbiodiniaceae (formerly Symbiodinium spp.), produce food for the coral and in exchange receive nutrients and carbon dioxide needed for photosynthesis. 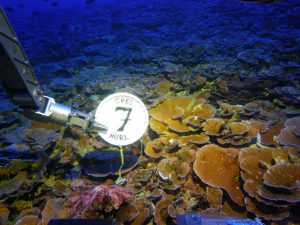 A Leptoseris spp. reef in the ‘Au‘au Channel, Hawaii at 90 meters depth (~295 feet). The 5-gallon bucket lid serves as a marker for repeat surveys and is removed at the end of the study. Credit: NOAA Hawaii Undersea Research Laboratory.

The study examined Symbiodiniaceae and coral hosts from 70–120 meters (230–394 feet) in the ‘Au‘au Channel, Hawai‘i. Results showed that each of the four species of Leptoseris (Leptoseris sp. 1, L. tubulifera, L. scabra, and L. hawaiiensis) used different strategies to maximize light capture including increasing the amount of pigment, decreasing cell size, and increasing the number of cells. These species may also use other sources for energy such as feeding on zooplankton or detritus to obtain the necessary nutrients for survival.