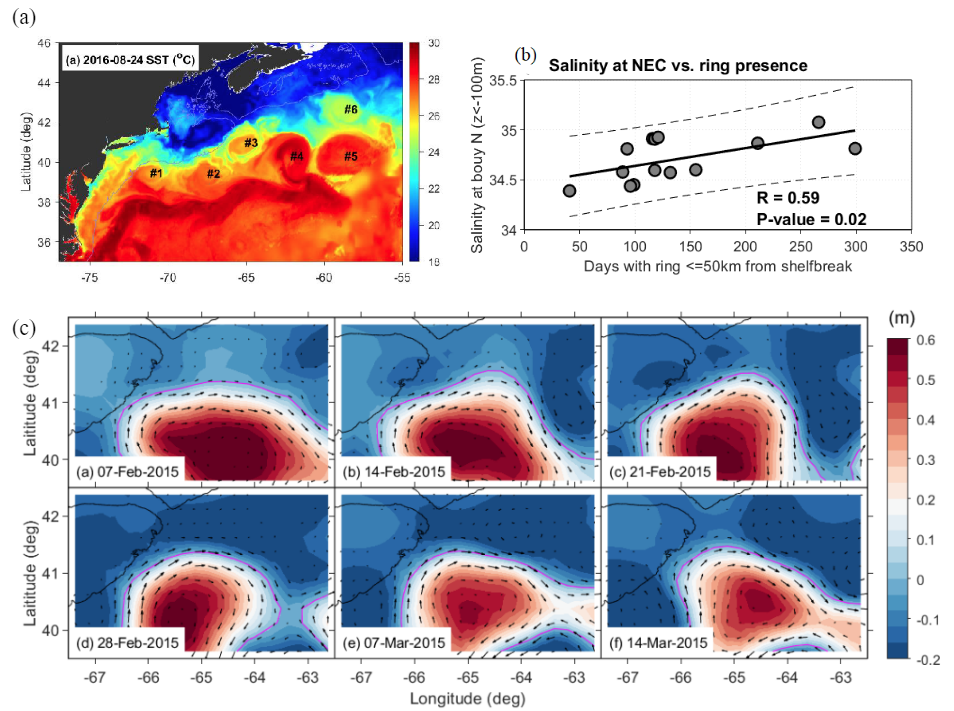 Figure 1: (a) Satellite images of SST on 24 Aug, 2016 highlighting 6 WCRs in the slope sea off the Mid-Atlantic Bight and Gulf of Maine. (b) Figure showing the linear relationship between ring activities and salinity at bottom; (c) Evolution of WCR eddy during model simulation. More details are referred to Du et al., 2022.

The intrusion of nutrient-rich slope water into the interior of the Gulf of Maine, mainly through the Northeast Channel, is crucial in supporting the high biological productivity in the Gulf, one of the most important fishing grounds in the United States. Slope water is the warm, salty subsurface water in the neighboring slope sea, which provides around 30 percent of the nutrients needed for primary production in the Gulf of Maine. The mechanism causing such intrusion, however, remains unclear. A new study combined both observations and numerical modeling efforts to further explore this mechanism (Fig.1a).

A newly published paper in Journal of Physical Oceanography found that the frequency of the Gulf Stream Warm Core Rings (WCRs aka mesoscale eddies shed from the Gulf Stream) activities near the Northeast Channel is linearly correlated with bottom salinity at the Channel (Fig.1b). Further modeling results suggest that the Gulf Stream WCRs may play a significant role in accelerating bottom-intensified, along-channel intrusion flow. During the impingement of the rings to the slope, coastal-trapped waves, excited by the ring-topography interactions, can intensify the bottom inflow through the Northeast Channel, carrying high-salinity slope waters into the deep basins into the Gulf of Maine (Fig.1c).

This research, conducted by scientists at Woods Hole Oceanographic Institution and NOAA NCCOS, highlights the role of wave activity during the WCR impingement to the slope edge, which further unravels the importance of understanding physical-biological interactions along the slope to inform ecological forecasts, including harmful algal blooms, in the Gulf of Maine.