Gulf of Mexico Algae Shield Themselves with Toxins When Hungry 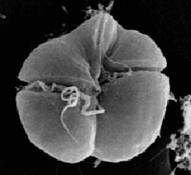 A photograph of the microscopic algae Karenia brevis, the plant responsible for toxic red tides in the Gulf of Mexico

A species of algae responsible for red tides plaguing Gulf coast communities protects itself by becoming highly toxic when it's hungry and vulnerable to being eaten by predators, say scientists from NOAA's National Centers for Coastal Ocean Science and North Carolina State University.

The red tide organism, called Karenia brevis, reacts to low levels of nutrients--particularly phosphorus--by using its remaining energy to make itself several times more toxic than it usually is, in order to guard itself from microorganisms that would eat it in its weakened state.

The paper's authors say that the findings could improve predictions about how toxic a nearby bloom is, based on phosphorus readings, so that local public health officials can close shellfish beds or prepare warnings for beachgoers.

The paper appears in the latest edition of the journal PLOS ONE.

A North Carolina State University press release says that "The study shows that harmful and ubiquitous Karenia brevis algae, which cause red tide blooms across the Gulf of Mexico, become two to seven times more toxic when levels of phosphorus, a major algal nutrient found in fertilizers and human waste, are low. Like wearing a suit of armor, producing highly toxic cells allows the algae to defend themselves against opportunistic waterborne grazers like zooplankton." Beach sign developed by Solutions to Avoid Red Tide (START), a local business group concerned with the impacts of red tide on local communities and tourism. Image courtesy of the Florida Department of Health and the Centers for Disease Control.

Red tide is responsible for killing seabirds, mammals, and massive amounts of fish, including a large amount of manatees this year. Humans who breathe 'red tide air' are at risk of severe respiratory irritation. People who eat shellfish tainted with the toxin can contract Neurotoxic Shellfish Poisoning (NSP), a rare but debilitating condition that can send them to the hospital.

NCCOS scientists also developed and refined red tide forecasts for both Florida and Texas. Now operated by a sister office in NOAA, these forecasts provide advance warning for blooms so local managers can selectively close shellfish beds and beaches, rather than blindly closing hundreds of miles of shoreline.