Home > Explore News > Giant Barrel Sponges at Dry Tortugas and Pulley Ridge are Genetically Similar, but Distinct from Other Places in Region

Giant Barrel Sponges at Dry Tortugas and Pulley Ridge are Genetically Similar, but Distinct from Other Places in Region 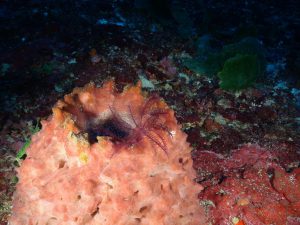 The giant barrel sponge, Xestospongia muta, can live to be more than 2,000 years old and grows up to 6 feet tall and 3 feet wide. Pictured at Pulley Ridge. Photo Credit: Coral Ecosystem Connectivity 2012 Expedition.

Giant barrel sponges, Xestospongia muta, are known as the “redwoods of the reef” as they are large (can be up to ~6 feet in height and ~3 feet across), long-lived (> 2,000 years old), and provide habitat for many reef species.

Researchers at Nova Southeastern University’s Guy Harvey Research Institute compared populations of giant barrel sponge found in the Gulf of Mexico (i.e., Flower Garden Banks, Pulley Ridge, and the Dry Tortugas) and Florida Reef tract (i.e., Marquesas Keys, Key Largo, and Palm Beach). Of these, only Pulley Ridge and Dry Tortugas populations were similar genetically and considered as a single population. The rest of the populations were all genetically different, meaning that each population is reliant on mostly local reproduction for maintaining or increasing their abundance and not on sponge populations from other areas. Thus, extensive disturbance to any one population could lead to local extinctions of this species.

The overall project, led by the University of Miami, investigated the role that the mesophotic reefs of Pulley Ridge (60–105 meters or ~195–345 feet) may play in replenishing key reef species in the downstream reefs of the Florida Keys National Marine Sanctuary and Tortugas Ecological Reserve.