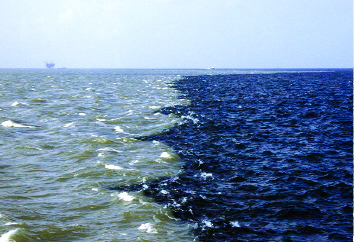 A plume of freshwater enriched in nutrients and sediments enters the Gulf of Mexico from the Mississippi River. Credit: Nancy Rabalais, Louisiana Universities Marine Consortium.

The NCCOS sponsored project, led by Louisiana State University and Louisiana Universities Marine Consortium (LUMCON), integrates modeling, observations, and experiments. The study hypothesizes that a band of nearshore waters creates the most productivity in this shelf ecosystem and that particles of organic carbon or 'POC' (i.e., living cells and cell parts) move offshore across the bottom of the continental shelf helping fuel the mid-shelf dead zone.

The study changes the focus on the origins of the dead zone from extended offshore river plumes to the nearshore regions and to a transport mechanism where subsurface currents transport POC from nearshore low salinity zones to offshore continental shelf zones. Scientists need to understand details of the transport and trapping processes, but these processes are gaining increasing scientific attention. These two shifts in understanding should be considered preliminary as there is not yet decadal-length research solidly supporting these ideas. Future testing of the possible cross-shelf fueling of hypoxia could be worthwhile for management agencies to understand, mitigate, and reduce the Gulf of Mexico dead zone. The study is published in the journal Estuaries and Coasts.