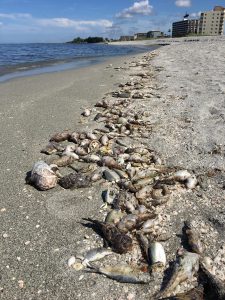 Pinellas County residents and visitors who are susceptible to the respiratory impacts of Florida's red tide—especially people with asthma and other chronic lung diseases—now have a new tool that will help them know their risks before they visit area beaches during red tides.

A new website now provides a risk level forecast for red tide respiratory impacts on each of Pinellas County's beaches. The 24-hour Experimental Red Tide Respiratory Forecasts are updated every three hours, following the collection and analysis of water samples. The forecast will typically be available on Tuesdays, Thursdays, Saturdays and Sundays.

Human respiratory impacts happen when the Florida red tide organism, K. brevis, is present and winds blow onshore or alongshore. When red tide is in the air, most people experience minor respiratory irritation—coughing, sneezing, teary eyes and an itchy throat. These symptoms go away when they leave the beach.  However, people with chronic lung problems like asthma and chronic obstructive pulmonary disease (COPD) can have severe reactions when they breathe in airborne red tide toxins—even ending up in the emergency room. Health officials advise that these people avoid red tide areas altogether and take all medications as prescribed, including having access to rescue inhalers. People with chronic lung disease should leave the beach if they begin experiencing respiratory problems, even if red tide is at very low or low concentrations.

"There are very few days when all of Pinellas County's beaches are affected by red tide, and often your favorite beach is only affected for part of the day," Kirkpatrick said. "This new forecast lets people see which beaches might be impacted by red tide, allowing them to plan their beach walks and other outdoor activities accordingly. They can use this tool the same way they use other weather reports."

In 2004, the National Oceanic and Atmospheric Administration's National Ocean Service (NOAA-NOS) and partners started issuing twice-weekly condition reports and bulletins that identified the risk of respiratory irritation for three-to-four-day periods on a county-by-county level. The information is now released through the National Weather Service's regular Beach Hazard Statement alerts.

This new Experimental Red Tide Respiratory Forecast builds on NOAA's condition reports and bulletins by providing information at a finer scale with forecast for each beach in Pinellas County.

"Now, thanks to the water testing conducted by Pinellas County, we're able to refine our forecasts and offer predictions on a beach-by-beach basis," said NOAA-NCCOS Oceanographer Dr. Richard Stumpf, who led the development of the new tool. "This forecast is the first step toward reducing the health and economic impacts of red tides for coastal communities. Red tide should be an inconvenience, not a crisis."

The experimental forecast is being tested in Pinellas County because it  rapidly developed a robust data collection system for red tide cell counts. Pinellas County Environmental Management worked with FWRI to institute regular beach-level water testing multiple times a week and at additional sites to verify the presence of red tide at its beaches when the bloom began impacting its shores. This cell count data, combined with wind forecast information, is helping to verify the beach-level forecast models.

"When red tide began impacting our residents, we knew we had to do what we could to provide our community with as much information as possible," said Kelli Levy, Director of the Pinellas County Environmental Management Division. "That's why we started collecting more water samples to determine whether red tide was on our beaches. Now, by combining that information with other NOAA data, we've been able to develop a new tool that will help our citizens and visitor—especially those with respiratory conditions—know their risks."

Pinellas County staff take water samples on Mondays, Wednesdays, Fridays and Saturdays. On days when no water samples are collected, no forecast information can be provided. The blooms simply move around too much to make longer-term forecasts at this time.

The Experimental Red Tide Forecast is provided in three-hour increments projected out over a 24-hour period and includes other details like wind speed and direction. It lists the risk level as:

The overall goal is to extend the Experimental Red Tide Respiratory Forecast to additional beaches in other counties, said Dr. Kate Hubbard, FWRI Research Scientist in charge of Florida's red tide program. "Red tide is an ongoing issue for Florida and if this forecast proves successful and useful for residents and visitors, we want them to have access to it as well. We're working with our partners, including state, county, and other agencies as well as citizen volunteers to develop more automated systems for rapid analysis of water samples for red tide that will help provide data for this type of forecast."

The Experimental Red Tide Respiratory Forecast could also move beyond Florida's borders, said Kirkpatrick of the Gulf's ocean observing organization. "The other Gulf states also experience red tides caused by Karenia brevis, though not to the same degree as Florida. We'd like to help residents and visitors in those states know their risks too."

Predictions differ about size of 2012 'dead zone' in Gulf of Mexico | NOLA.com