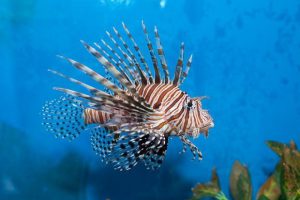 The lionfish is invasive to the Atlantic, Gulf of Mexico, and Caribbean. Credit: NOAA

Scientists are investigating the prevalence of ciguatera toxins in invasive lionfish in response to interest in establishing commercial fisheries for controlling their populations.

Lionfish, native to reef ecosystems of the tropical and sub-tropical Indo-Pacific, were introduced to Florida waters in the 1980s, and have spread rapidly throughout the Atlantic, Caribbean, and Gulf of Mexico. These invasive, carnivorous fish significantly reduce other fish and benthic invertebrate biomass, fish recruitment, and species richness in reef ecosystems. Fisheries resource managers have proposed the establishment of a commercial fishery to reduce lionfish populations and mitigate adverse effects on reef communities. However, the region is known for benthic microalgae that produce a neurotoxin that can accumulate in certain reef fish and cause ciguatera fish poisoning (CFP) when consumed. Therefore, before a lionfish fishery can be established, it is critical to determine if and where lionfish might also contain the ciguatera toxin. 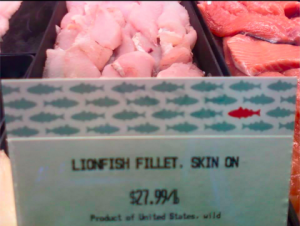 Lionfish filets for sale at a market. Credit: NOAA

To address this issue, scientists with NOAA, the U.S. Food and Drug Administration, North Carolina State University, the Gulf and Caribbean Institute, Institut Louis Malardé French Polynesia, and the Discovery Bay Marine Laboratory West Indies surveyed toxin levels in 293 lionfish from 74 locations in the Atlantic, Caribbean, and Gulf of Mexico. Across all sites, there was only a 0.7% prevalence of lionfish with ciguatoxin concentrations above FDA guidance level for when fish should not be consumed.  In many areas surveyed, none of the fish contained measurable ciguatoxins or when present was at levels well below the FDA recommended guidance level for safe consumption. However, in a few "hot spot" locations known to produce ciguateric fish, such as the British Virgin Islands, up to 53% of the lionfish contained measurable ciguatoxins, with some fish exceeding FDA guidance levels.

The results indicate that lionfish can accumulate ciguatoxins to levels of concern in certain localized ciguatoxic endemic areas. The manuscript recommended that local primary seafood processors should recognize and avoid purchasing lionfish from known ciguateric areas and that processors and harvesters prepare a Hazard Analysis and Critical Control Plan which includes knowledge and written documentation of CFP risk in the harvest area. These results will further help coastal and fishery managers protect human health by advising the public to not consume lionfish from known ciguatera areas.