Home > Explore News > Coral Bleaching May be Induced by Hypoxia

Coral Bleaching May be Induced by Hypoxia

NCCOS-supported researchers found low oxygen (hypoxia) led to coral bleaching, mass coral mortality, and changes in the microbial community on a Caribbean coral reef. In 2017, hypoxia was detected on a coral reef in an inner bay on the coast of Panama. The reef was then compared to a nearby reef on the open coast, which remained well oxygenated. Over six days, the researchers documented the impacts of the hypoxic event to include the corals losing their symbiotic algae (coral bleaching), dramatic shifts in the microbial assemblage, including bacteria that are unique to hypoxic environments, and 50% loss of live coral cover. 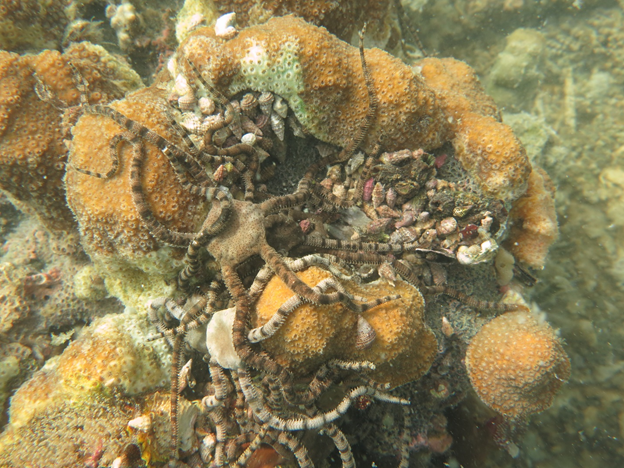 In response to low oxygen, mobile invertebrates, such as brittle stars, aggregated on the top of boulder corals. Photo Credit: Maggie Johnson, WHOI.

While the impacts on corals persisted one year after the event, the microbial community rapidly rebounded within a month. This suggests that future studies focused on coral bleaching should consider measurements of oxygen in addition to temperature, as it too can cause a coral bleaching response. More generally, the documented difference in recovery trajectory between corals and reef-associated microbes provides guidance to conservation and management efforts interested in the response of coral reefs to environmental change.

This project is part of the NCCOS Coastal Hypoxia Research Program (CHRP) led by the University of Florida in collaboration with the Smithsonian Institution. It is examining the impact of hypoxia on coral reef ecosystems.