A new study led by researchers at East Carolina University and NCCOS documents changes in the timing and duration of fish larvae entering North Carolina estuaries. The study used a 34-year dataset showing that patterns of fish species entering the estuary can be linked to climate change in the coastal ocean. 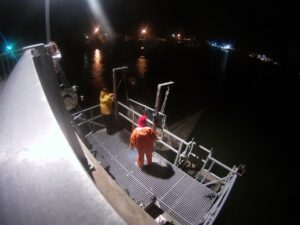 Many organisms rely on their environment to signal the seasonal timing of life history events, which is referred to as “phenology.” As the effects of climate change become more pronounced, variation in the direction and magnitude of shifts in species occurrence in space and time may disrupt long-time species interactions in ecological communities.

In the study, the researchers examined how the fall and winter fish larvae (ichthyoplankton) community in the Newport River Estuary located inshore of Pamlico Sound, NC, responded to environmental variability over the last 27 years. The study utilized a unique long-term dataset based on weekly ichthyoplankton samples collected from the Pivers Island Bridge (Beaufort, NC) since 1986 as part of the “Bridgenet” program. The Beaufort Bridgenet Ichthyoplankton Sampling Program is the longest inlet sampling program on the Atlantic coast and is managed by NOAA National Marine Fisheries Service (NMFS) and NCCOS staff (largely volunteer) at the NOAA Beaufort Lab.

Species varied in the magnitude of their responses to all of the environmental variables studied, but most shared a common direction in inlet ingress change. SST and northerly wind strength had the largest impact on estuarine ingress phenology, with most species ingressing earlier during warm years and delaying ingress during years with strong northerly winds. 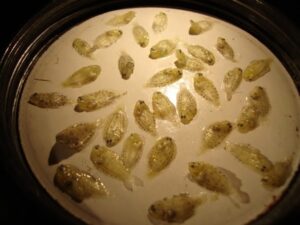 As SST warms in the coming decades, the average date of ingress of some species (i.e., Atlantic croaker Micropogonias undulatus, summer flounder Paralichthys dentatus, pinfish Lagodon rhomboides) is projected to advance on the order of weeks to months, assuming temperatures do not exceed a threshold at which species can no longer respond through changes in phenology. These shifts in ingress could affect larval survival and growth since environmental conditions in the  estuarine and pelagic nursery habitats of the fishes also vary seasonally.

The long time series shows that changes in the patterns of fish species entering the estuary can be linked to climate change in the coastal ocean. It provides insight into how species may respond to future ocean warming.

The Beaufort Bridgenet time series and similar ichthyoplankton time series offer opportunities for further study of relationships between the environment and ingress phenology. Comparisons across similar time series could provide insight into the future of certain fishes as they change their range with changing ocean conditions and would clarify whether environmental influences on phenology are consistent across a species’ range. Lastly, factors besides the environment, such as effects of population size and age structure, may influence phenology and are worthy of future study.

The study is published in the journal Marine Ecology Progress Series.