NCCOS-supported researchers have determined the natural removal rates of nitrogen and the potent greenhouse gas methane from Louisiana's coastal waters. The study investigated patterns of pelagic denitrification (bacterial conversion of nitrogen fertilizer to a stable gas) and methane gas oxidation along Louisiana's continental shelf. The team found that the amount of nitrogen compounds and methane removed naturally from the water column is significant, but unlikely to improve water quality. This is the first report of water column denitrification rates along the Louisiana shelf hypoxic zone. 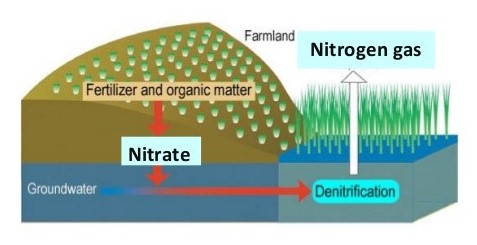 Denitrification is the conversion of nitrate to stable nitrogen gas by bacteria under anaerobic conditions in soil and water. Credit: “Biology Form 4, Chapter 8 - Dynamic Ecosystem Part 5.”

Coastal waters often receive an overabundance of nutrients, which can stimulate dense plant growth that results in depletion of dissolved oxygen and death of aquatic life in the affected area. This process, known as eutrophication, is especially true in the continental shelf area of the northern Gulf of Mexico, where a low-oxygen summer “dead zone” exists.

In the pre-human world, “reactive” nitrogen that plants could use (e.g., nitrates and ammonium) was mainly created by lightning and biological nitrogen fixation (e.g., symbiotic bacteria in legume roots). The rate of denitrification just about equaled the rate of nitrogen fixation, meaning that nitrogen removal generally equaled nitrogen creation. However, modern human industrial activities associated with food production and fossil fuel combustion have greatly increased the cycling of reactive nitrogen through the atmosphere, hydrosphere, and biosphere (Galloway et al., 2003).

The study's findings are based on water column nitrogen and methane dynamics examined over a three year period at stations west of the Mississippi River’s birdfoot delta, from near the river mouth to the Louisiana–Texas border, during expeditions aboard the LUMCON R/V Pelican. The team conducted extensive sample chemical analyses and rate measurements on the Pelican and at the University of Georgia. 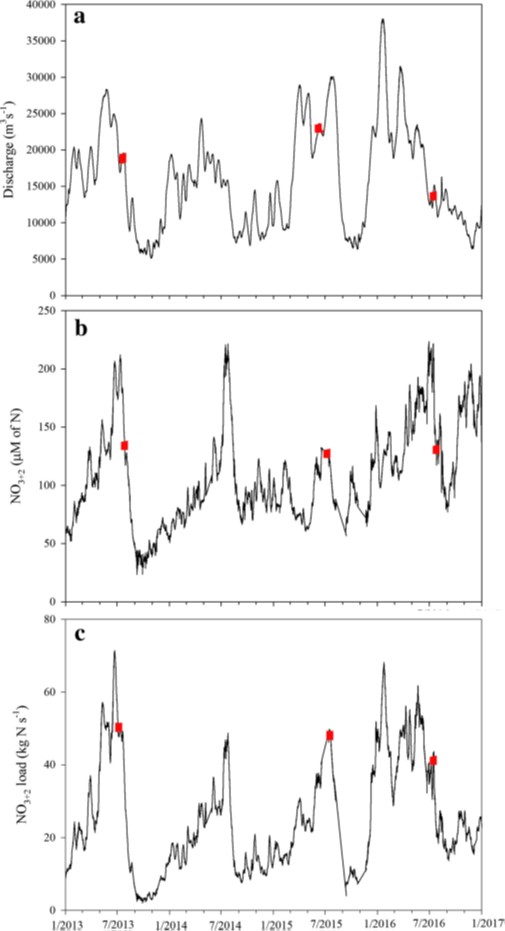 The study notes that denitrification occurs mostly in the low oxygen waters and sediments. Greenhouse gases, nitrous oxide and methane can be produced under low oxygen with a high nutrient supply. If not consumed by bacteria in the water column, these greenhouse gases enter the atmosphere and can contribute to global warming. The distribution and rates of key greenhouse gas cycling processes remain largely uncharacterized for most ecosystems, especially those experiencing eutrophication.

The study concludes that denitrification and methane oxidation provide ecosystem services via removal of reactive nitrogen and methane. For example, over an average 67 days of hypoxia, denitrification could remove between 0.1 to 47 percent of the total nitrogen loaded to the Gulf of Mexico from the Mississippi River. The range of these percentages highlights the inherent variability of the denitrification removal capacity. Conversely, methane oxidation does not function as an effective removal process with the majority of the methane produced in the low oxygen waters escaping to the atmosphere.

Given the possible contribution to climate warming, the study results call for further evaluation of greenhouse gas concentrations and microbial dynamics along the Louisiana shelf and perhaps in other human-impacted nearshore low oxygen zones. Understanding and documenting the microbial processes influencing these reactive trace gases in hypoxic waters is imperative with worldwide hypoxic zones projected to spread (Diaz and Rosenberg, 2008).

The study was supported in part by the NCCOS NGOMEX project Integrated Ecosystem Modeling of the Causes of Hypoxia. 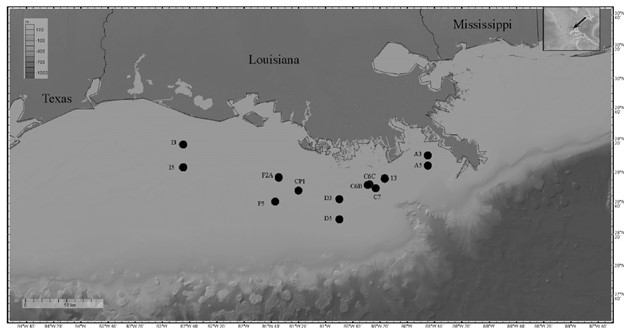