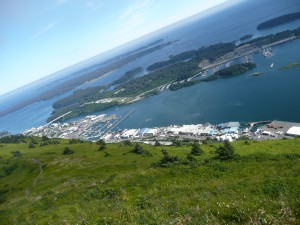 The view flying in over Kodiak, Alaska. Credit: NOAA.

Sixteen hours of flights is a loooong time, but that's what it takes to get to Alaska from the East Coast. Kodiak is unusually warm this day. Sunny and in the high 70s. The island, like a lot of Alaska, has stunning mountainous scenery and black sand beaches, including one where people surf! It's also very wet. The forest is a temperate rainforest. The woods are carpeted with moss. Even the top sides of the tree branches are covered.

I have arrived several days early to be sure all the gear has arrived in one piece, and to see that it gets transferred to the ship as we don't know where the Coast Guard has it stored. One by one, all the pallets arrive and are hoisted onto the deck. A good start. There are always some last minute items to be picked up in town. Fortunately, Kodiak is a fishing town, so marine supply stores are well stocked with almost anything you would need on a ship.

The layout of the Coast Guard base is interesting. In order to get to the docks for the big ships, you have to circle the base. This route includes crossing the air strip. This means you have to stop to be sure a C-130 cargo plane is not landing or taking off as you cross. Nobody does a rolling stop at that intersection.

One thing we discover we don't have are electronic versions of the navigation charts for the launch. The launch has been borrowed from another ship in the fleet and they don't normally operate the launch in the Arctic, only in southern Alaska or Washington and Oregon. I have printouts of all the charts and satellite images of the sampling sites, and of course the ship has the electronic versions, but the small boat doesn't. Because the Arctic is so far away, nobody in Kodiak has the chips with the charts on them. This will be more than a little inconvenient. On the other hand, the survey data for most inshore places up there are from the 1940s, so the charts are little more than general guidance anyway. Hopefully the rest of the crew coming from Anchorage may be able to pick up what we need before they travel here.

Speaking of which, their flight was delayed and then canceled due to thick fog. The weather changed drastically from the warmth of the weekend. It is now overcast with light rain and patchy fog in the mountain passes. Driving late in the evening as the sun goes down is like driving into a Stephen King novel. Hope that's not an omen. As I write this, I get a message that they have landed on the island.