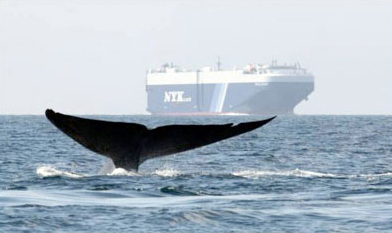 A whale passes through an area with heavy ship traffic off the California coast.
Credit: John Calambokidis/Cascadia Research.

A new report analyzes the potential economic effects of strategies to manage the co-occurrence of shipping traffic and whales in the Channel Islands region off the coast of California. The goal of the study was to estimate, for the Channel Islands National Marine Sanctuary (CINMS) and other agencies, the potential economic impact of ship management alternatives to protect whales.

The Channel Islands region serves as a nautical highway for the nation's two busiest ports: Long Beach and Los Angeles. Over 3,000 vessels pass through the area every year and are responsible for transporting approximately twenty-three percent of all domestic vessel imports and exports. Vessel traffic in the region has increased and is expected to increase further in the coming years, placing blue, fin, humpback, and gray whales in the region at growing risk of suffering potentially lethal collisions with large, ocean-going vessels.

The research team analyzed vessel inventory carrying costs and vessel transportation costs in the context of several potential management measures to reduce ship-strikes on whales. The researchers examined combinations of extending the existing traffic separation scheme, rerouting along the western side of the Channel Islands, expanding the area to be avoided, and reducing vessel speed during the whale visitation and ozone season.

Reducing vessel speed alone was shown to potentially increase costs to the shipping industry within the study area by 1.2 to 2 percent. However, rerouting vessels alone and combined with speed reduction was shown to potentially decrease the costs to the shipping industry by 3.4 percent and 1.6 to 2.2 percent, respectively. The expected total costs per metric tonne–nautical mile are not predicted to significantly change under any of the potential management measures.

Beyond this analysis, the researchers stressed that future feasibility studies of potential measures to manage the co-occurrence of whales and ships must consider the effects on both whales and the shipping industry in the rerouted areas. Additionally, the possible direct or indirect benefits, such as helping whale populations recover and reducing human health impacts from air pollution derived from implementation of any of these measures should be assessed. Whales also provide an array of ecosystem and economic services, including recreational opportunities for whale watching.

The study will provide managers at CINMS and other regional agencies an estimate of the possible economic impact to the shipping industry of management options to reduce ship-strikes on whales, as well as provide a framework for similar economic analyses in other regions. Ultimately, the effects of potential management measures calls for a clear understanding of current and expected vessel fleet behavior and composition.