NCCOS sponsored research focusing onthe combined effects of low dissolved oxygen and ocean acidification finds that acidification can increase fish sensitivity to hypoxia. This has important implications for increasing atmospheric carbon dioxide effects on our marine systems and may indicate that official dissolved oxygen regulatory criteria do not protect living resources as intended. 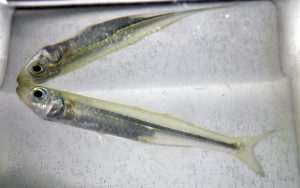 Inland silverside (Menidia beryllina) reflected in aquarium. When threatened with low oxygen, fish often swim to the surface where oxygen is more abundant but predators can more easily spot them. Credit SERC

Hypoxia, or low dissolved oxygen (DO), and carbon dioxide (CO2)-induced acidification (i.e., low pH), are key stressors in aquatic environments exacerbated by human nutrient inputs. Scientists expect both of these conditions to increase in severity as concentrations of atmospheric CO2 and global temperatures continue to rise. Understanding how species respond to changes in DO and pH is necessary topredict the effects of climate change on estuarine ecosystems. This is especially true in the shallow shoreline margins of these systems where factors such as respiration, photosynthesis, and tides create large daily fluctuations of DO and pH.

Led by Dr. Denise Breitburg of the Smithsonian Environmental Research Center (SERC), a group of scientists focused on shallow-water hypoxia anddetermined how acidification affects hypoxia sensitivity on two important estuarine forage fishes: the Atlantic silverside (Menidia menidia) and the inland silverside (M. beryllina). They recorded adult fish ventilation (gill cover opening/closing) rates, aquatic surface respiration (ASR-when fish breathe in the oxygenated surface layer during hypoxic events), and mortality as they lowered either DO or both DO and pH simultaneously. Fish subjected to low DO and low pH in the laboratory performed ASR and died at higher DO concentrations than fish subjected only to hypoxia. Additionally, fish beat their opercula (their external gill covers or flaps) slower, possibly contributing to the ASR and mortality differences. These results indicate acidification can increase fish mortality under hypoxia conditions, not only directly but also indirectly by increased vulnerability to predation during increased use of ASR that can have important effects on fishpopulations.

This study demonstrates the importance of testing multiple stressors when investigating the impact of climate change and other human activitieson marine and estuarine organisms. Fish showed no differences in ASR behavior when only subjected to pH stress. If the investigation had only investigated the effects of acidification, it could have concluded that pH alone has no effect on fish survival. Although most acidification research focused on larvae or juveniles, this research indicates that all life stages should be considered when determining how species respond to climate change. There may be no 'refuge' life stage where an individual organism becomes relatively immune to acidification.

Read more about the study in the SERC online news blog Shorelines .