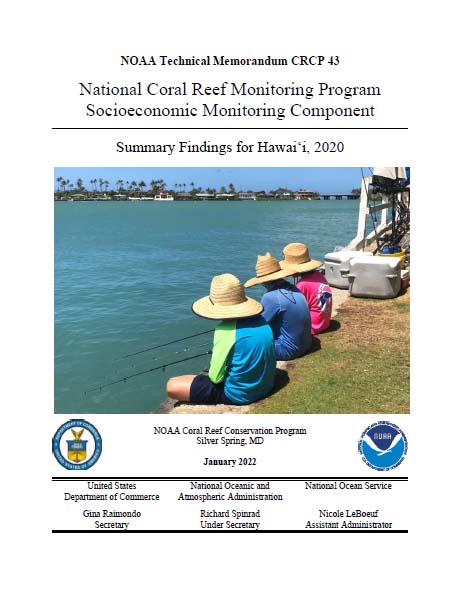 The Socioeconomic Component of the National Coral Reef Monitoring Program (NCRMP) gathers and monitors a collection of socioeconomic data in seven U.S. coral jurisdictions. The team continued its second monitoring cycle with data collection in Hawaii in 2020, and recently released their report of summary findings along with a new infographic. The report outlines current human dimensions information relevant to coral reef resources in Hawaii, as well as trends between the first (2015) and second monitoring cycles. One infographic focuses solely on the 2020 findings, while the second focuses on trends. Survey results are representative of Hawaii (further stratified by East and West), Kauai, Maui, and Oahu islands.

Household surveys conducted in March to June of 2020 revealed that Hawaii residents generally supported a range of potential marine management policies and regulations (such as coral restoration efforts and stricter control of sources of pollution to preserve water quality), and supported a measure to manage 30 percent of Hawaii’s nearshore waters by 2030, despite low familiarity with Hawaii’s 30x30 Initiative. Residents were familiar with all included threats to coral reefs, recognized that Hawaii’s coral reefs provide a variety of ecosystem services to the islands (such as cultural importance, storm protection, and economic and tourism benefits), and generally agreed that Marine Managed Areas help protect coral reefs and increase the number of fish. Residents believed the quality of marine resources had become worse over the past ten years and felt that conditions are likely to worsen in the future. Surveys also revealed that Hawaiians top three activities continued to be beach recreation, swimming/wading, and snorkeling. Additionally, the majority of resident households consumed seafood at least once a week in both 2015 and 2020, and in 2020 nearly a quarter of all residents in Hawaii consumed locally caught seafood from coral reefs at least once a month. Most residents used reef-safe sunscreen with some frequency, and residents of West Hawaii (island), Kauai, and Maui were more likely to participate in conservation activities.

These and other findings offer early glimpses into NCRMP socioeconomic monitoring of Hawaii’s coral reefs, and they will be used to update composite indicators that detail the status of Hawaii’s coral reef adjacent communities in relation to the other U.S. coral reef jurisdictions. As each monitoring cycle takes between five and seven years to complete, Hawaii residents are targeted for surveying again in 2027.

The NCRMP Socio team is currently busy reviewing and analyzing data from the second monitoring survey in American Samoa, and data collection in Puerto Rico is currently underway.