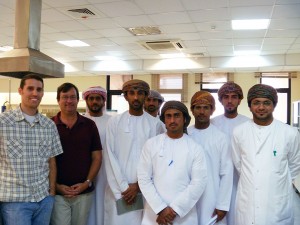 As part of a formal agreement with the International Atomic Energy Agency,two researchers from the National Centers for Coastal Ocean Science visited Muscat, Oman this week as "IAEA Experts."

The seminar provided the 15 participants with an overview of algae and toxin sampling techniques and visual identification of algae species. Next March, the Americans return to teach the Omanis how test using their own equipment. Currently, when they sample an algal bloom for toxicity, the testing facility takes six months to return its results. Using the NCCOS radioisotope method, the same test takes three days.

According to the United Nations Food and Agriculture Organization,blooms of harmful algaeremain an issue discouraging companies to invest in fish farming.Products from aquaculture are important for trade as countries such as Oman seek to diversify their economies away from oil and gas.