Since its inception in 1990, the National Centers for Coastal Ocean Science has provided the research foundation upon which management of the "dead zone" in the Gulf of Mexico is based. This 24th year, $27 million commitment is an exemplar of NOAA's goal to "protect, restore and manage the use of coastal and ocean resources through ecosystem-based management."

Hypoxia (low dissolved oxygen) occurs in many of the world's aquatic environments. Hypoxic and anoxic (no oxygen) waters have existed through geologic time, but the frequency of their occurrences in shallow coastal and estuarine areas worldwide is increasing, largely attributed to anthropogenic nutrient pollution. The largest zone of oxygen-depleted coastal waters in the United States, and the second largest for the world's coastal oceans, is in the northern Gulf of Mexico on the Louisiana continental shelf. 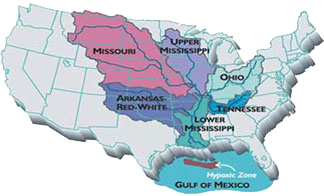 The interagency Mississippi River/Gulf of Mexico Hypoxia Task Force was established in the fall of 1997 as part of a process of considering options for responding to Gulf of Mexico hypoxia. The Task Force is made up of leading representatives from states and the federal government, and includes Gerd Glang, Director of the NOAA National Ocean Service Office of Coast Survey

In 2001, the Task Force issued its first Action Plan that set a goal to reduce the size of the hypoxic zone to 5,000 km2 by 2015. CSCOR’s (formerly the Coastal Ocean Program, COP) involvement in the issue began with the NECOP Program; supporting interdisciplinary projects that provided the resource base for the COP-sponsored Committee on Environment and Natural Resources (CENR) integrated assessment in 2000 that was called for in the Harmful Algal Bloom and Hypoxia Research and Control Act (HABHRCA). This assessment and its six supporting technical reports provided the state-of-knowledge on the characteristics, causes, and effects of Gulf of Mexico hypoxia, and guided the scientific consensus leading to the Action Plan. NCCOS has played a leading role on the Coordinating Committee for the Mississippi River/Gulf of Mexico Watershed Nutrient Task Force. In addition, NCCOS continues to lead the support and management of hypoxia research in this region through the HABHRCA-mandated NGOMEX Program.

Knowledge gained through the NGOMEX Program satisfies several elements of the Action Plan. Ongoing studies, utilizing a regional ecosystem approach, are documenting the dynamics of the hypoxic zone over the Louisiana continental shelf and helping to better define the relationships among nutrients, phytoplankton, carbon production and flux, physical properties, and hypoxia effects on fisheries. These studies are leading to enhanced predictive models capable of examining a multitude of interacting factors (e.g., nutrient input and recycling, freshwater inflow, circulation patterns) on the size of the hypoxic zone and how hypoxia affects commercially and ecologically important species in the region. These predictions of complex processes, or ecological forecasts, will allow for the comprehensive assessment of alternative management strategies within the context of influences from the basin and climatic trends.

The 2001 Action Plan, which included 11 specific implementation actions, suggested that a 30% reduction in nitrogen load is needed to reach the goal. Building on knowledge gained through the NGOMEX program, NCCOS led several elements of a science reassessment of the 2001 Action Plan, coordinating symposia and preparing peer-reviewed scientific papers, including the "Hypoxia in the Northern Gulf of Mexico: Assessing the State of the Science Symposium", co-led with EPA. These scientific symposia and papers provided up-to-date information to an evaluation of the science by an EPA Science Advisory Board Hypoxia Advisory Panel. Following a scientific reassessment process, the Task Force released the 2008 Action Plan, which reaffirmed the goal of reducing the hypoxic zone to 5,000 square kilometers and suggested 45% reductions of both nitrogen and phosphorus.

Learn more about The Dead Zone