Research Area(s): Stressor Impacts and Mitigation / Biological Effects of Contaminants and Nutrients
Region(s) of Study: U.S. States and Territories / South Carolina
Primary Contact(s): ed.wirth@noaa.gov; pete.key@noaa.gov
This project began in August 2020 and will be completed in December 2025.

Fire retardant foams currently contain fluorine-based chemicals known to be toxic and persist in the environment. Fluorine-free foams are now in development, but little is known about the environmental impacts of these new chemicals. We are evaluating these potential replacement formulations by assessing their toxicity in several estuarine fish and invertebrate species. 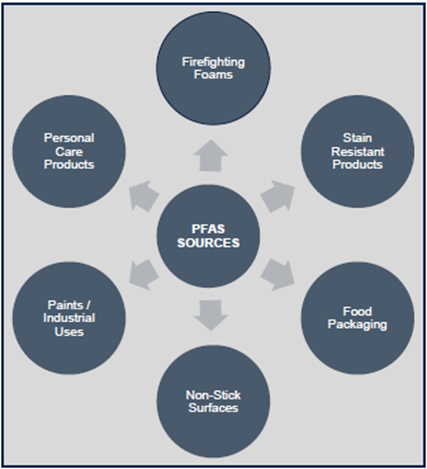 The ubiquity of PFAS in consumer products.

Why We Care
Per- and polyfluoroalkyl substances (PFAS) are chemicals that have been in a range of commercial and industrial products, including fire retardants, since the 1940s. Perfluorooctane sulfonate (PFOS) and perfluorooctanoic acid (PFOA) have been the most extensively produced and studied. PFOS is known as a “forever chemical”’ because it can bioaccumulate in wildlife.

PFAS are additives in Aqueous Film Forming Foams (AFFFs) used to extinguish aviation fires (i.e., jet fuels). The U.S. Department of Defense mandated that PFAS be phased out of AFFFs by October 2023 due to the harmful and persistent environmental impacts of these chemicals. In support of this mandate, fluorine-free AFFFs are currently under development and consideration.

To inform the development of these new foams and protect the environment, NCCOS and its partners are working to understand the potential environmental impacts of PFOS foams and candidate fluorine-free AFFFs by addressing related ecotoxicology data gaps for marine and estuarine species.

What We Are Doing
Our preliminary results for larval estuarine fish, shrimp, and oysters after PFOS exposure reveal the most sensitive species to be sheepshead minnows, followed by grass shrimp and oysters. Bioassay analysis performed on the exposed adult oyster (Crassostrea virginica), resulted in impairment of vital cellular functions and cell death. When oysters are removed from contaminated waters (at 3 parts per million (ppm) exposure) and allowed to purge for 24 hours, the measured PFOS in tissues remains high, indicating longer depuration times are needed.

The next phase of our research will be to conduct acute and chronic toxicity tests with the fluorine-free AFFF formulations using estuarine fish and invertebrate species. Concurrently, collaborators at the U.S. Army Corps of Engineers–Engineer Research and Development Center will be testing the same new formulations with freshwater species. Researchers at the National Institute of Standards and Technology are also working on the project to provide chemical quantification of PFOS and fluorine-free AFFF products in the toxicity tests.

Benefits of Our Work
Our work will be essential in answering key scientific questions about PFOS and fluorine-free AFFF toxicity endpoints. Evaluations of new technologies and risk-based decisions will occur directly from results obtained by these experiments. Additionally, we will provide the Department of Defense with a relative ranking of environmental hazards for proposed fluorine-free AFFF formulations. Data generated from the next phase of our toxicity testing will lend scientific support for remediation of PFOS contamination and logical decisions on the ability to use fluorine-free AFFF in commercial applications.