We are summarizing the role of Gray’s Reef National Marine Sanctuary, a live-bottom reef off the coast of Georgia, in the migration of fish, sharks, and other biota in US east coast waters. Using acoustic telemetry data, we are describing when fish pass through the Sanctuary, where they are from, and how this area functions in their connectivity with the western Atlantic Ocean. Ultimately, we hope to demonstrate the importance of this sanctuary for animal migrations throughout the US Atlantic coast. 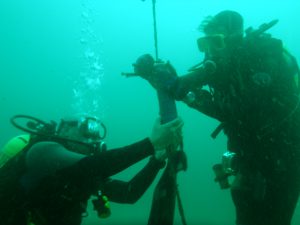 Researchers download acoustic receivers that record fish-movement data. These devices are used to listen for transmitters that scientists have implanted into fish. Credit: NOAA

Gray’s Reef National Marine Sanctuary is a natural live-bottom protected area that may be important in connecting recreationally, commercially, and ecologically important species to other areas of the western Atlantic Ocean. Its is located centrally on the continental shelf between North Carolina and Florida. A variety of species have been found at Gray’s Reef, from top predators such as white sharks to protected species such as Loggerhead sea turtles. Many of the species found at Gray’s Reef migrate throughout the western Atlantic Ocean. However, the timing and duration of how fish and other species use Gray’s Reef in these broad movements is unclear. We seek to demonstrate the importance of this protected area for animal movements throughout the southeast US ocean ecosystem.

To understand how Gray’s Reef supports animal movements throughout the western Atlantic Ocean, we are analyzing ten years’ worth of acoustic telemetry data. Acoustic telemetry is a way of passively tracking animal movements by placing transmitters within animals and listening devices throughout the sanctuary. Working with Gray’s Reef National Marine Sanctuary and regional collaborators, such as the Florida Atlantic Telemetry Network, we are identifying every tagged individual that has visited Gray’s Reef since 2008 and summarizing how each species uses the sanctuary. To demonstrate the sanctuary’s role in connectivity, we are also summarizing where individuals are coming from prior to arrival at Gray’s Reef, and where they go after leaving the sanctuary. Using this data, we will be able to demonstrate how various species use Gray’s Reef and the importance of the sanctuary in supporting their movements and migrations.

Impacts of Our Work

This work will help us understand the importance of for several migratory species. Results will be used to create educational material for the Sanctuary and further validate its role as an important habitat. This work will also help us to demonstrate the importance of Gray’s Reef telemetry to researchers working elsewhere along the eastern seaboard of the US.