At the request of the U.S. Virgin Islands (USVI) Department of Planning and Natural Resources and the U.S. National Park Service, NCCOS conducted an assessment of chemical contaminants in the Salt River Bay National Historical Park and Ecological Preserve in St. Croix, USVI.

Why We Care
In 2014, the USVI Department of Planning and Natural Resources (DPNR) and the National Park Service (NPS) requested that NOAA’s National Centers for Coastal Ocean Science (NCCOS) conduct a chemical contaminants and bioeffects assessment in the Salt River Bay National Historical Park and Ecological Preserve (SARI). There was concern that chemical contaminants in the SARI are impacting biota in the estuarine portion of the park and perhaps further out on adjacent coral reefs. This project helped fill data gaps relating to chemical contaminants and toxicity in sediments. 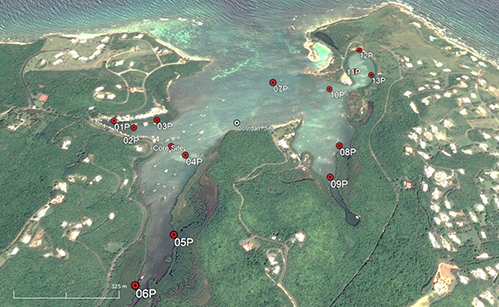 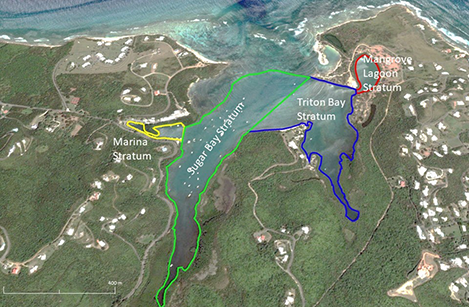 What We Did
Working closely with partners from DPNR and NPS, four sediment strata, including Triton Bay, Marina, Mangrove Lagoon, and Sugar Bay were established in the estuarine portion of the Salt River Bay National Historical Park and Ecological Preserve (SARI). In September 2018, 13 sediment samples and a sediment core were collected. Transportation to and from the sites was by boat the NPS provided. Sediment sampling activities followed standard protocols established by NOAA’s National Status and Trends (NS&T) Program (https://repository.library.noaa.gov/view/noaa/17784, https://repository.library.noaa.gov/view/noaa/17783).

Fieldwork involved a minimally intrusive collection of the surficial (top 2–3cm, recent deposition) sediment samples. Thirteen sites were selected using a stratified random sampling design. At each of these sites, surface sediments were collected using a Van Veen sediment grab deployed and retrieved by hand. Sediment samples were stored on ice in a cooler while in the field, and then frozen at ‐20° C upon return to NPS facilities.

Collection of the sediment core occurred at one location in consultation with project partners. Sediments were also collected for benthic infaunal community analysis. Benthic infaunal samples were collected at each site by sieving the entire contents from a Van Veen grab and then preserving the sieved sample.

At the end of the field mission, samples for contaminant and toxicity analysis were shipped to either the NOAA NS&T contract lab (TDI‐Brooks International; College Station, Texas), or to the NOAA analytical facility in Charleston, South Carolina. The two labs analyzed the samples for different compounds; TDI-Brooks for organics and Charleston for metals. Samples were analyzed for a suite of over 270 organic (e.g., hydrocarbons and pesticides) and inorganic (e.g., metals) chemical contaminants. Sediment toxicity assays included the human reporter gene system (HRGS) P450 assay and the sea urchin embryo development assay. The preserved benthic infaunal samples were shipped to the contract lab (Barry Vittor and Associates) for species identification and biomass measurements.

What We Found
The results of the chemical contaminant analysis indicated mostly low to moderate concentrations of the contaminants analyzed. The only contaminants that exceeded a NOAA sediment quality guidelines were zinc and copper, both in the Marina stratum. Copper was close to a concentration where impacts are likely to occur.

The sea urchin development assay results were confounded by high levels of ammonia in the sediment samples, and may have been related to recent rainfall, or to remnant effects (i.e., plant detritus) from the 2017 hurricanes (i.e., Irma and Maria) that devastated the USVI. The HRGS P450 assay indicated the presence of organic chemical contaminants at sites in both the Marina and Mangrove Lagoon strata, some of which may have been beyond the list of compounds analyzed.

The assessment of benthic infaunal organisms in the sediments indicated no significant differences between strata. However, diversity was lowest at a site in the Marina stratum, and at one of the sites in the Mangrove Lagoon stratum. Correlations between the benthic infaunal community and chemical contaminants indicated a significant negative correlation between taxa richness (number of species at the sites), and the ERMq, an indicator of pollution due to the presence of multiple contaminants.

Benefits of Our Work
These data will allow for the characterization of impacts of stressors to infaunal communities in the SARI, providing data needed by local resource managers to identify areas within the SARI that may need additional management or restoration.