Natural fringing marshes in Carteret County, N.C., may not be able to keep up with sea level rise. A recent study shows that, over the last 10 years, these marshes have not increased their surface elevation - by trapping sediment - as fast as the 40-year, local sea level rise rate of three millimeters per year.

By contrast, marshes behind shoreline-stabilizing, stone sills appear able to keep one step ahead of this sea level rise rate, having increased their surface elevation by four millimeters per year over the same study period. Although this higher rate of sediment accretion in sill marshes provides protection against sea level rise, it can alter the distribution of marsh vegetation and reduce fishery habitat. Fringing marshes, alone or in combination with stone sills or oyster reefs, are also known as " Living Shorelines " and are being used more frequently as an alternative approach to estuarine shoreline stabilization. 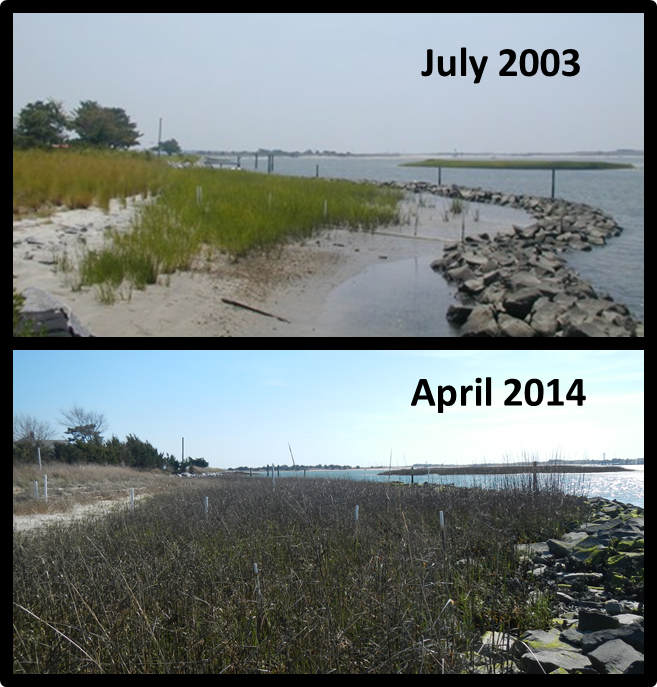 Researchers from the National Centers for Coastal Ocean Science (NCCOS) recorded these changes using 29 Surface Elevation Table (SET) stations installed at seven sites within the county between 2004 and 2007. The team placed SETs in both restored marshes behind offshore stone sills and in natural marshes. Scientists will use the long-term, marsh surface elevation data collected by these devices to evaluate the effect of stone sills on marsh structure and function and to model the response of marshes to changes in sea level rise.