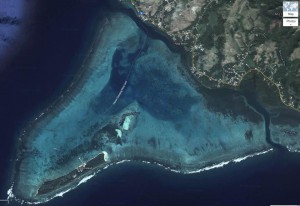 Cocos Lagoon is an atoll-like coral reef lagoon located on the southwestern coast of the island of Guam in the South Pacific. The lagoon is separated from the open ocean by a series of fringing reefs and barrier islands, of which Cocos Island is the largest. Cocos Lagoon is a beautiful area; is popular for recreational activities, including fishing, boating and diving; and is also an important resource for subsistence fishers. Achang Reef Flat Marine Preserve, in the lagoon's northeast corner, is a protected area with lush reef flats, fringing reefs, and seagrasses, along with many species of sea turtles, fish, invertebrates, sea grasses, and a few sharks.

We were asked by our partners in Guam to conduct a study to better characterize chemical contaminant issues in Cocos Lagoon. Between 1944 and 1963, the Coast Guard operated a LORAN or long range navigation station on the island. Following closure of the station, elevated concentrations of polychlorinated biphenyls (PCBs) were found in nearshore waters, both in sediments and biota (e.g., fish), and also in soils on the island. PCBs were used in the past in electrical equipment such as transformers and capacitors, and it is thought that contamination in the lagoon is the result of PCB-contaminated equipment being discarded on the land and in the water, along with the transport of PCBs in runoff from the island as might occur during a heavy rainfall event. PCBs are toxic, and some have been associated with developmental and neurological effects. Remedial actions including the removal of PCB contaminated equipment on the land and in the water, and the removal of soil on the island have occurred. However, local residentsand environmental managers are concerned aboutremaining PCB contamination and the effects of these contaminants in Cocos Lagoon and on human health. 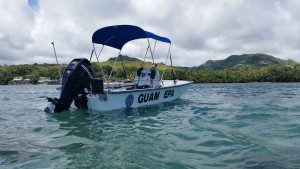 The Guam EPA's small boat out in Cocos Lagoon, where we examine the area for chemical contaminants. Credit: NOAA

We are working to characterize PCBs and other chemical contaminants throughout the lagoon. Our project will be used as a screening tool to assess where PCBs and perhaps other contaminants may be an issue throughout Cocos Lagoon, both in the sediments and in biota.

Our partners for this project include the Guam Environmental Agency (Division of Environmental Monitoring and Assessment), Guam Department of Agriculture (Environmental Monitoring and Surveillance [EMAS] Division), University of Guam, NOAA's National Marine Fisheries Service (Habitat Conservation Division), and NOAA's Coral Reef Conservation Program. Our local partners are essential to this project. They are providing expertise, personnel and boats for the work. Without them, this project would likely not be possible.

I will be writing additional blog entries as the work in Cocos Lagoon progresses. Hafa Adai, from Guam! 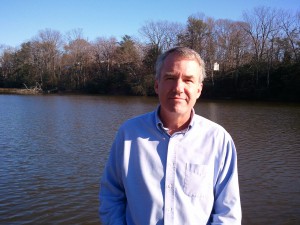 Tony Pait, an NCCOS scientist with the Center for Coastal Monitoring and Assessment. Credit: NOAA

The Lionfish May Be More Than A Nuisance For Florida | WFSU