For sediment sampling in Cocos Lagoon, we used what is known as a 'stratified -random design.' Basically, a series of strata (layers) were developed in consultation with local partners, and then random sampling points were scattered in each stratum. At these points, samples of sediment could be collected. By using this design, any point within a stratum had an equal chance of being sampled, and as a result, levels of chemical contamination can be estimated by stratum, and then compared between strata. We also collected fish if we found them in the strata.

Today, we sampled fish on the eastern and western sides of Stratum 4. The weather was warm and sunny, but a good breeze helped keep us cool. We needed sunblock to keep from being sunburned. The waters on the reef flat in Stratum 4 are fairly shallow, particularly as you move toward the reef crest that divides Cocos Lagoon from the ocean.

In addition to Guam EPA folks (Jesse Cruz and Danzel Narcis) today we also had scientists from NOAA's National Marine Fisheries Service (Valerie Brown) and NOAA's Coral Reef Conservation Program (Adrienne Loerzel) along for the sampling. The amount of local and NOAA participation in this project, particularly for the field effort, has been great.

During the planning phase of the project, we were told that one of the best ways to catch fish, particularly the larger fish, is by using a spear gun. Unfortunately, we can't use this method for a couple of reasons. First, using a spear gun is likely to result in the loss of fluids from the fish, which could influence the concentrations of chemical contaminants found in the fish. Second, the tip of the spear itself could introduce additional metals, altering the concentration of metals found in the fish. 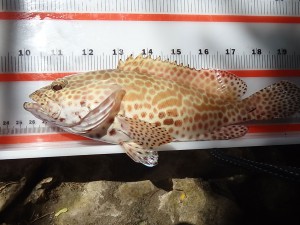 For these reasons, we needed to use either cast nets or hook and line for the project. Both Danzel and Jason were very good at using both. We got a number of fish today, including honeycomb grouper (Epinephelus merra), thumbprint emperor (Lethrinus harak), and the orange-striped emperor (Lethrinus obsoletus). As mentioned above, the waters on the reef flat of Stratum 4 were fairly shallow. Both Danzel and Jason fished a while from the boat, and then jumped out into the shallow, waist-deep water to cast their lines. I stayed on the boat, measuring the length of the fish that were caught and then putting them on ice, and taking the water parameters with our YSI field instrument.

During the afternoon, I looked up from the measuring and writing I was doing, and saw what I thought was a dark fin moving through the water, about 20 meters from our boat. One of the Guam EPA scientists (Annie Guerrero) looked up from her writing, and said it looked like a small, black-tipped reef shark. We went on with our work, and later Danzel waded back to the boat with his catch, and climbed aboard. I said we thought we had seen a small, black-tipped reef shark. Danzel smiled and said he had seen it too. He also said it was not small at all. He estimated the length of the shark at 5 feet! 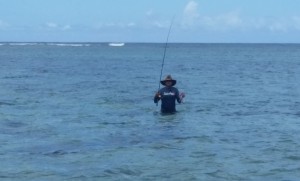 Jason Miller (University of Guam) on his way back from fishing. Credit: NOAA.

Ian and Dennis were busy sampling sediments in Stratum 4, and then in the deeper waters of Stratum 2. Sampling sediments with the PONAR grab in deeper waters is hard work. The grab has to cocked each time (fingers kept out of the way), and then the grab is slowly lowered to the bottom. After the mechanism on the PONAR trips when the grab hits the bottom, and a sediment sample is taken, the PONAR grab must be retrieved by hand, pulling the grab with the sediment sample up from the bottom. After about 10 times of deploying and retrieving the grab, your back muscles start complaining, and you're likely to get a few blisters as well. 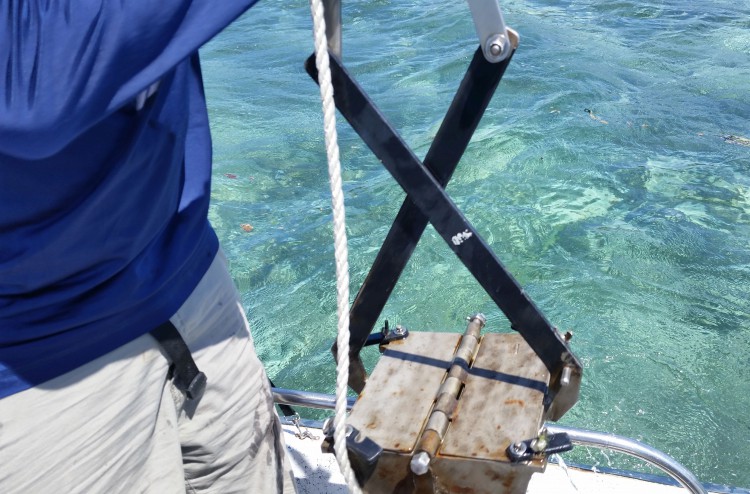 Looking at the data sheets, it appears that Ian, Dennis and the folks from Guam EPA and NOAA sampled six sites today, which is great! Between them and our fishing efforts, we're moving through the collections needed for this field mission. The weather has been great. This afternoon, as we were driving back, the radio announcer said something about a tropical depression possibly moving this way next week. At this point, it is a fairly disorganized system, and hopefully it will stay south of us.