Our first day of sampling in Cocos Lagoon. This morning, we drove to the Guam EPA operations building in Barrigada. There, we met up with our colleagues, loaded up the smaller boat, and then drove south. We passed through numerous towns along the way, many with beautiful beaches and in some areas hills that rose up close to the shore, covered in long grasses waving in the breeze in a manner similar to what you might see in a wheat field. I saw a variety of tropical plants growing wild or in front yards, some of which I recognized as being used as potted plants back home on the East Coast of the U.S. There are miles and miles of beautiful beaches in Guam, and on some I could see fishermen throwing their cast nets in the early morning light, to catch fish in the shallow waters. 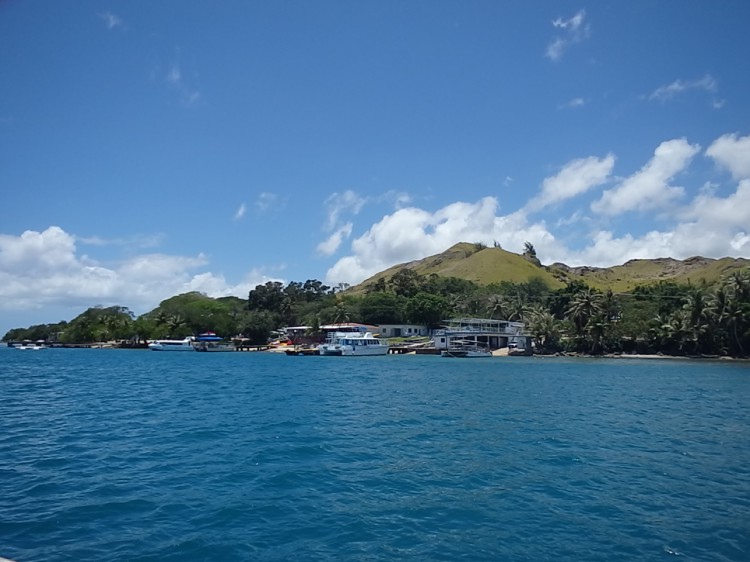 Ferry dock in the town of Merizo, Guam. Credit: NOAA.

We stopped at a marina in the town of Agat, where the larger Guam EPA boat was docked. This boat then left the marina to meet us farther south in Cocos Lagoon. At the southern tip of Guam, thetown of Merizo borders Cocos Lagoon and is home toabout 2,000 people. Houses line the shore, and thereis a dock used by a series of small ferries that take visitors out to Cocos Island for the day. A number of folks here in Merizo were interested in what we were doing. As we talked with them, nearly everyone voiced concern regarding chemical contaminants in Cocos Lagoon. We told them we were here to collect samples to begin to assess contaminants throughout the lagoon. 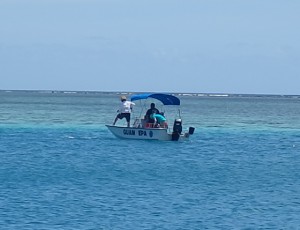 Sampling of sediments from one of the Guam EPA boats. Credit: NOAA.

On this day, we took samples of sediments, and caught fish in the nearshore waters around Cocos Island. Ian and Dennis were taking sediment samples, and I was helping the Guam EPA folks catch fish near shore. I guess I should say that the Guam EPA folks were catching the fish, and I was writing down particulars likelength of the fish caught, along with taking measurements of watertemperature, dissolved oxygen, and salinity.

Danzel Narcis, a scientist and naturalist at Guam EPA, demonstrated his skills with the throw net. We caught a number of fish, including convict tang (Acanthurus triostegus), and honeycomb grouper (Epinephelus merra). Jason Miller, who was also with us, used hook and line to catch fish as well. Jason works for the University of Guam, is a private fisherman, and lives in the town of Merizo. We fished on both the western and eastern sides of the island. We were particularly interested in those species that tended to be territorial, that is those that didn't move around too much, and also those species that might be used as food fishby local fishermen. Elevated levels of PCBs have been found in fish, particularly, it appears, on the southwestern side of the island. 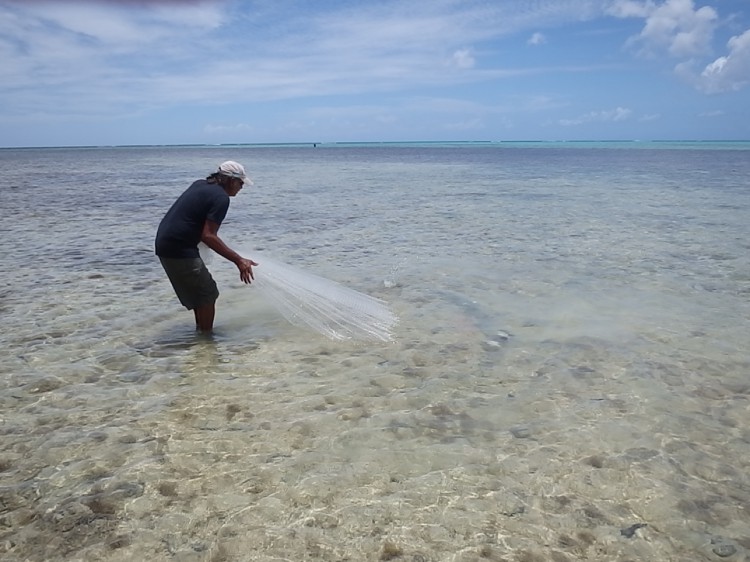 Both Danzel and Jason are great fishers, and I don't think we would have gotten the number of fish (or maybe any) that we did as easily, if it hadn't been for them. We walked around the southern tip of Cocos Island, as the waters were too shallow for the boats, and sampled sediments and collected fish and sediments on the eastern side of Cocos Island. It was nice to be on the eastern side of the island,where awelcome breeze helped to cool us down. By the end of the day, we were all pretty tired, and glad to head back to Guam EPA to freeze the samples we had collected, rest, and prepare for the next day.

Letter from David Kennedy to the National Ocean Service