The Mississippi River/Gulf of Mexico Hypoxia Task Force (HTF) has made major strides in reducing point source nutrient pollution in the Gulf of Mexico watershed, and had some success in mitigating nonpoint source pollution through targeted nutrient reduction projects.  However, despite this progress, research supported by NOAA’s National Centers for Coastal Ocean Science (NCCOS) has reported that a further 59% reduction in the amount of nitrogen flowing down the Mississippi River in spring will be required to reduce the dead zone size to the 5,000 square kilometer goal set by the HTF.

The dead zone is a large region of low-dissolved-oxygen bottom waters (hypoxia) that forms every summer in the northern Gulf of Mexico because of nutrient inputs from the Mississippi River Basin and seasonal water column stratification. Gulf of Mexico hypoxia can kill stationary organisms such as shellfish, reduce reproductive capabilities in fish species, decrease the average size of shrimp caught, and, if it continues to form annually at its current high levels, may result in future declines in the abundance of fish populations.

Policymakers developed goals to reduce the area extent of hypoxia because of these ecological, economic, and commercial fisheries impacts. Sufficient progress through voluntary and incentive-based non-point source nutrient reduction programs, however, remains elusive after 15 years of effort. The most recent measurement of 8,776 square miles earlier this month marks the largest dead zone measured since mapping of the area began in 1985 — an area about the size of New Jersey. 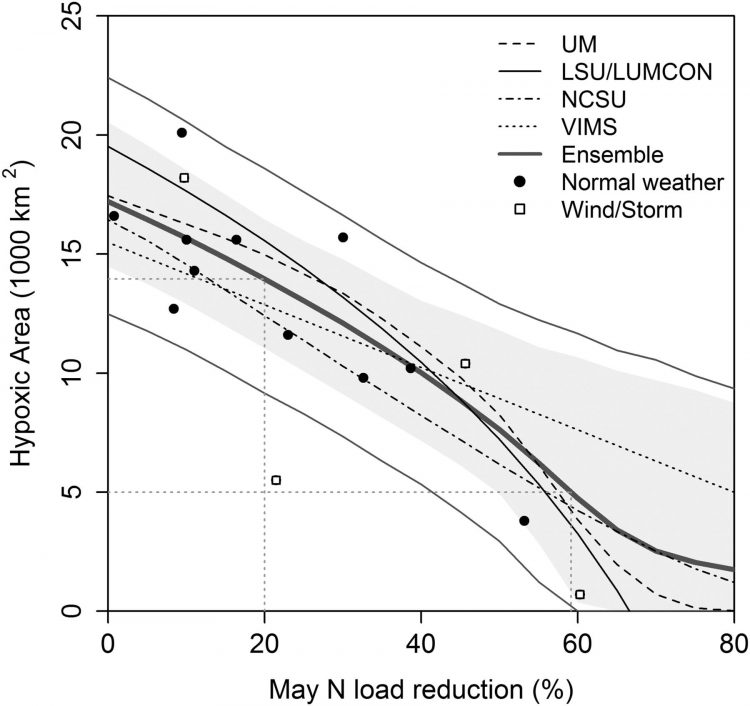 Load–response curves for the individual models, with the ensemble mean curve, 95% credible interval (Cis) accounting for deterministic uncertainty (shaded area), and 95% predictive intervals accounting for prediction error (averaged across a 5-year period) and deterministic uncertainty (gray solid lines). Gray dotted vertical and horizontal lines indicate the mean hypoxic area expected in response to a 20% load reduction from the 1980–1996 long-term average, and the mean load reduction required to achieve the 5,000-km squared Task Force goal. For comparison, observations (70) from 1985 to 2011 for years when the loads were below the 1980–1996 baseline are superimposed on the graph for normal years (filled circles) and wind/storm years (open boxes). Credit: The University of Michigan

The HTF has a goal to reduce the  areal extent of the hypoxic zone to 5,000-square kilometers by 2035.The HTF also set an interim 20 percent load reduction target of spring nitrogen loading from the Mississippi River by 2025 as part of their adaptive management process. To ensure they set the right nutrient reduction target to reach the dead zone size goal, they asked modelers to (1) reassess the loading reduction required to achieve the 2035 goal and (2) to determine the effect of the 20 percent interim load reduction.

A NCCOS-supported modeling team addressed both questions using an ensemble of four different hypoxia models. Their results, published in the Proceedings of the National Academy of Sciences, indicate that under typical weather conditions, a 59% reduction in Mississippi River nitrogen load is required to reduce the hypoxic area to 5,000 square kilometers. The current interim HTF goal of a 20 percent load reduction is predicted to produce an 18 percent reduction in hypoxic area over the long term. The study indicates that a more aggressive approach is needed to achieve the hypoxic zone reduction goal for a dead zone smaller than 5,000 square kilometers by 2035.

Scientists from the University of Michigan, North Carolina State University, Louisiana State University, and the Virginia Institute of Marine Science make up the modeling team. NCCOS hypoxia modeling provides policymakers with alternate management strategies based on a range of nitrogen reduction scenarios.