Small Fish Could Be In Big Trouble Without Wetlands

Coastal population growth and a desire to guard against sea level rise and coastal erosion has led to extensive conversions of natural wetlands and beaches to bulkheads and riprap. A new NCCOS-funded study recently published in Estuaries and Coasts explores how these changes are affecting fish and crustaceans in nearshore areas of Chesapeake Bay. 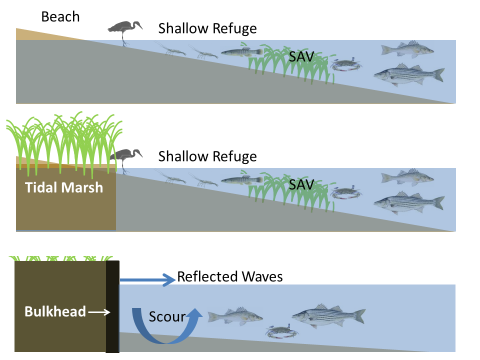 Very close to shore, water was deeper near hardened shorelines, which allowed larger fish to occupy these areas. Smaller fish either avoided deeper hardened shorelines, or were driven out or eaten by larger fish. In addition to harboring smaller fish, natural shorelines showed a greater variety of species, suggesting that shoreline hardening that comes at the expense of natural habitat likely reduces overall estuarine production.