Shellfish Larvae Struggle in Fluctuating Oxygen and Acidity in Estuaries

A study supported by NCCOS and the NOAA Ocean Acidification Program found thatinteracting effects of acidified and low oxygen (hypoxic) waters reducedthe survival, growth, and development of larval stages of three important shellfish species: bay scallops, hard clams and eastern oysters. Shellfish larvae were exposed to ideal, acidified and low oxygen conditions both individually and in combination. The study included these treatments both as constant conditions and with fluctuations similar to an estuary. 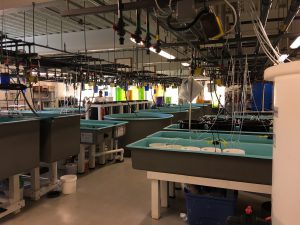 As utilized for this study, the Gobler Laboratory has perfected experimental chambers for exploring the effects of acidification, hypoxia, temperature changes, and nutrient loading on a variety of organisms from algae to fish. Credit C. Gobler, SUNY Stony Brook

In estuarine environments, water quality conditions can change rapidly due to tidal exchanges, high nutrient input from runoff, and daily temperature fluctuations and sunlight that fuels daily algal growth. This can have large impacts on oxygen and carbon dioxide (CO2) levels such asdecreased oxygen and increased acidity in the water that can interfere with shellfish growth. Even though oxygen and CO2 vary simultaneously in nature, they are seldom simulated fluctuating together in laboratory studies.

When conditions alternated between ideal and low oxygen/acidified on a daily basis, the negative effects of low oxygen and/or acidification remained, even though the conditions were more favorable for part of the daily cycle.

This suggests that the fluctuations were too intense, and/or the durations of more favorable conditions were too short for bivalve larvae to overcome the stress of low oxygen and acidification. All of these negative impacts could ultimately impact shellfish industries, as well as the many ecosystems services that bivalves provide.