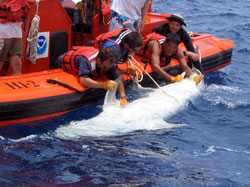 Remote healthy coral reefs, like those found in the PMNM, are uniquely dominated by large numbers of apex predators, includingcarnivorous sharks, jacks, and snapper. Like all coral reefs, the PMNM is supported by photosynthetic algae.

The study results have immediate implications for management of healthy coral reef resources and the restoration of unhealthyreefs. Because thePMNM ecosystem was found to be heavily dependent on algae growing on the sea floor, impacts to the reef and its algae from damaging bottom trawling, coral bleaching or other threats could influence the organisms higher upthe food web.

'Anything affecting native algal species, such as sedimentation, dredging, or the spread of non-native invasive algae, will ultimately impact the abundance of prized food fish such as snapper or jacks,' said Randall Kosaki, NOAA Deputy Superintendent of Papahanaumokuakea and a co-author on the study. 'Taking care of the reef itself will help to ensure healthy fish populations.'

This study was a collaboration between researchers from NOAA's National Centers for Coastal Ocean Science and PMNM of the Office of National Marine Sanctuaries.