Scientists are expecting that this year's Chesapeake Bay hypoxic low-oxygen zone, also called the "dead zone," will be approximately 1.37 cubic miles—about the volume of 2.3 million Olympic-size swimming pools. While still large, this is 10 percent lower than the long-term average as measured since 1950.

The anoxic portion of the zone, which contains no oxygen at all, is predicted to be 0.27 cubic miles in early summer, growing to 0.28 cubic miles by late summer. Low river flow and low nutrient loading from the Susquehanna River this spring account for the smaller predicted size. 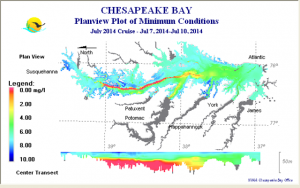 This chart shows, in the upper portion, the location of hypoxic (yellow, orange and red shading) bottom waters of Chesapeake Bay during the early July 2014 survey. The bottom portion shows a longitudinal "slice" of the Chesapeake Bay main stem showing the depth of the hypoxic waters thru the central area of the Bay. These data are collected by Maryland and Virginia as part of the comprehensive Chesapeake Bay Monitoring Program. Credit: Maryland Department of Natural Resources.

This is the ninth year for the Bay outlook which, because of the shallow nature of large areas of the estuary, focuses on water volume or cubic miles, instead of square mileage as used in the Gulf of Mexico dead zone forecast announced last week. The history of hypoxia in the Chesapeake Bay since 1985 can be found at EcoCheck, a website from the University of Maryland Center for Environmental Science.

The Bay's hypoxic and anoxic zones are caused by excessive nutrient pollution, primarily from human activities such as agriculture and wastewater. The nutrients stimulate large algal blooms that deplete oxygen from the water as they decay. The low oxygen levels are insufficient to support most marine life and habitats in near-bottom waters and threaten the Bay's production of crabs, oysters and other important fisheries.

The Chesapeake Bay Program coordinates a multi-year effort to restore the water and habitat quality to enhance its productivity. The forecast and oxygen measurements taken during summer monitoring cruises are used to test and improve our understanding of how nutrients, hydrology, and other factors affect the size of the hypoxic zone. They are key to developing effective hypoxia reduction strategies.

The predicted 'dead zone' size is based on models that forecast three features of the zone to give a comprehensive view of expected conditions: midsummer volume of the low-oxygen hypoxic zone, early-summer oxygen-free anoxic zone, and late-summer oxygen-free anoxic zone. The models were developed by NOAA-sponsored researchers at the University of Maryland Center for Environmental Science and the University of Michigan. They rely on nutrient loading estimates from the U. S. Geological Survey.

"These ecological forecasts are good examples of the critical environmental intelligence products and tools that NOAA is providing to stakeholders and interagency management bodies such as the Chesapeake Bay Program," said Kathryn D. Sullivan, Ph.D., under secretary of commerce for oceans and atmosphere and NOAA administrator. "With this information, we can work collectively on ways to reduce pollution and protect our marine environments for future generations."

The hypoxia forecast is based on the relationship between nutrient loading and oxygen. Aspects of weather, including wind speed, wind direction, precipitation and temperature also impact the size of dead zones. For example, in 2014, sustained winds from Hurricane Arthur mixed Chesapeake Bay waters, delivering oxygen to the bottom and dramatically reducing the size of the hypoxic zone to 0.58 cubic miles.

"Tracking how nutrient levels are changing in streams, rivers, and groundwater and how the estuary is responding to these changes is critical information for evaluating overall progress in improving the health of the Bay," said William Werkheiser, USGS associate director for water. "Local, state and regional partners rely on this tracking data to inform their adaptive management strategies in Bay watersheds."

The USGS provides the nutrient runoff and river stream data that are used in the forecast models. USGS estimates that 58 million pounds of nitrogen were transported to the Chesapeake Bay from January to May 2015, which is 29 percent below average conditions. The Chesapeake data are funded through a cooperative agreement between USGS and the Maryland Department of Natural Resources. USGS operates more than 400 real-time stream gages and collects water quality data at numerous long-term stations throughout the Chesapeake Bay basin to track how nutrient loads are changing over time.

"Forecasting how a major coastal ecosystem, the Chesapeake Bay, responds to decreasing nutrient pollution is a challenge due to year-to-year variations and natural lags," said Dr. Donald Boesch, president of the University of Maryland Center for Environmental Science, "But we are heading in the right direction."

NOAA's mission is to understand and predict changes in the Earth's environment, from the depths of the ocean to the surface of the sun, and to conserve and manage our coastal and marine resources.