Sailing and Sampling the FKNMS Aboard the Nancy Foster: Blog Post 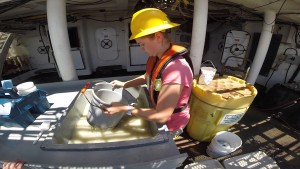 Hello from NOAA Ship Nancy Foster! My name is Erika Koontz and I am an undergraduate student at Washington College majoring in Environmental Studies with minors in Biology and Spanish. This summer, I have the opportunity to intern for ten weeks with the Beaufort, NC NOAA lab and spend one of those weeks working with the Charleston NOAA lab on the Nancy Foster from June 6 through June 13. 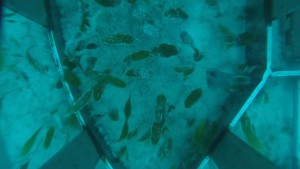 A view of bottom station 22, captured with a GoPro Hero 3+. Credit: Erika Koontz

Aboard the ship, the crew and I have been working steadily over the past week to survey the Florida Keys National Marine Sanctuary (FKNMS). It has been a routine cruise for the lab's seaworthy veterans, but a first for me, a landlubber. The goal of this cruise was to survey thirty pre-selected random stations within the sanctuary to acquire a generalized reading of the health of the sanctuary communities. Additionally, the cruise also set out to gather more bathymetry data by means of multi-beam echo sounder (MBES), a type of SONAR, technology to fill in some of the data gaps regarding the habitat dispersal throughout the sanctuary. Each station was measured with a thorough set of parameters, including water quality, benthic infauna composition, and presence of contaminants in sediment. These tasks were accomplished via the launching of a CTD, a Young Modified Van Veen Grab Sampler, and fishing rods. With the CTD, I collected water samples from the twelve Niskin bottles on the CTD rosette for microorganism and possible micro-plastic analysis. During some stations, I assisted in the deployment of the Young grab and the sieving of the sediment grabs to acquire the benthic infauna samples. Once those tasks were completed in that order at each station, myself and other scientists set out to fish for benthic associated fish species for later tissue analysis. 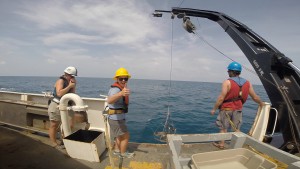 In addition to my roles at each station, I also coordinated my own project for the Beaufort, NC lab. Working closely with all members of the Charleston crew, I temporarily mounted a GoPro Hero 3+ to the Young grab to acquire video footage of the bottom habitats at all stations. This 'piggyback' project was not in the original cruise plans, but was added late because of my role as intern with the Beaufort, NC lab this summer. In Beaufort, I am working closely with Chris Taylor, Don Field, and Jenny Vander Pluym to continue the development of a complete habitat composition map of the FKNMS. The map contains a lot of MBES data for the shallow (<20 m) portions of the sanctuary, but has little MBES data for the deeper (>20 m) areas. Additionally, the deeper portions also lack much visual data, namely images and video that help in the confirmation of the GPS positions of those habitats. The first step in adding to the sanctuary habitat map is the collection of MBES data and the semi-automated processing of it to determine habitat composition. A computer program initially characterizes the MBES data and sorts it into habitats, and then people help confirm or correct the program's assumptions via the images and videos- and that process of verifying the proposed habitat distribution model is called 'ground-truthing'. This is where my footage taken from the GoPro is critical, because the program performs approximately at a 50% accuracy rate, leaving the other 50% of the interpretations incorrect.

A special thanks to Cindy Cooksey, Chief Scientist for the cruise, the Charleston Crew, Ruth Kelty, Chris Taylor, Don Field, Jenny Vander Pluym, and Erik Ebert at the Beaufort Lab for giving me this opportunity.