Photographs of the flipper of a bottlenose dolphin stranded on Seabrook Island, South Carolina, show lesions likely to be that of the fungal disease commonly known as lobomycosis. 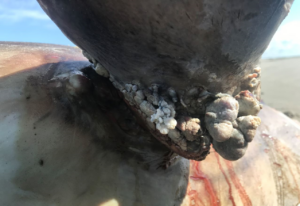 Lobomycosis, also known as keloidal blastomycosis or Jorge Lobo disease, is caused by the fungus Lacazia loboi (formally named Lobo loboi). Lobomycosis occurs in humans most commonly in the Brazilian Amazon region, but also other South and Central American countries, and Mexico. It is known to affect bottlenose dolphins in the Atlantic Ocean (see ScienceDirect summary).

The disease could also be that of Paracoccidioidomycosis ceti, a similar fungus thought to be a distinct species. While the disease is not typically fatal to the dolphin, it is a pathogen of emerging concern and has never been reported in dolphins stranded in South Carolina, though it has been sparsely reported in North Carolina, and more frequently in Florida (i.e., Indian River Lagoon), Texas, the Caribbean, and South America.

Microscopic and gross lesions are similar to that seen in human cases of lobomycosis and there is potential of transfer to humans (zoonosis), although considered low. Continued monitoring of stranded animals will help discern whether this disease is spreading further north. 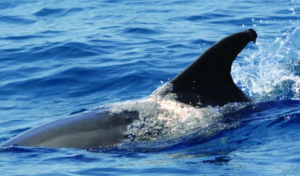 Free-swimming bottlenose dolphin (offshore ecotype) sighted off the Outer Banks of North Carolina, March 5, 2005, with raised gray to white nodules over the dorsal surface, consistent with those of lobomycosis seen in other Atlantic bottlenose dolphins. Credit Rotstein et al. 2009. 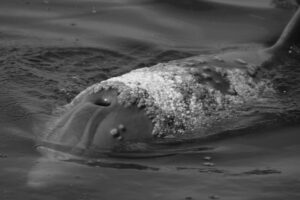