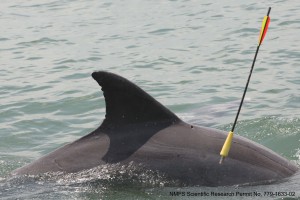 A remote biopsy sample is collected from a bottlenose dolphin. Credit: NOAA

NCCOS scientists reported that persistent organic pollutants (POPs) were likely not a contributing factor to the poor health conditions and increased mortality observed in some populations of bottlenose dolphins following the Deepwater Horizon (DWH) oil spill. This study, recently published in the journal Science of the Total Environment, analyzed 169 remote biopsy samples that were collected across six northern Gulf of Mexico field sites. Measured POP levels in dolphin blubber for the field sites were in the lower half of the range compared to previously reported POP concentrations from other southeastern U.S. sites. The study was conducted from 2010 - 2012 by a team of NCCOS, National Marine Fisheries Service and Chicago Zoological Society researchers as part of the Natural Resource Damage Assessment of the 2010 DWH oil spill.