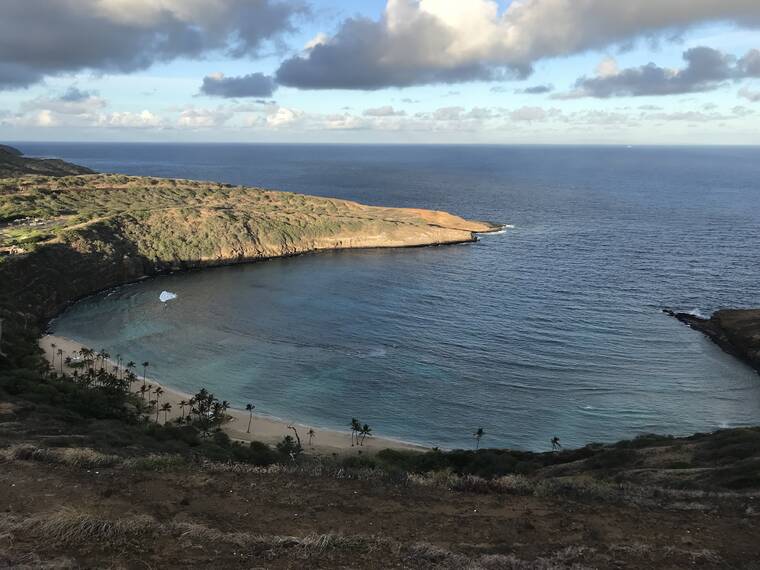 A new study shows that swimmers and beach showers are sources of sunscreen pollution in Hanauma Bay, resulting in levels of oxybenzone that can threaten the health of the coral reef and seagrasses in the bay.

The volcanic walls that protect and enclose the bay are a major reason for its popularity with swimmers, but also a significant factor in retaining sunscreen pollution. Oceanographic models determined that sunscreen pollution from a single day’s contamination can be retained in the bay for more than two days (up to 50 hours). This means sunscreen pollution can build-up for each successive day that the bay is open to visitors. Since endangered sea turtles and monk seals are frequent visitors to Hanauma Bay, they too can be exposed to the potential threats of sunscreen pollution.

The bay was closed to all visitors from March 2020 to December 2020 due to the COVID-19 pandemic. Also, selling sunscreens containing oxybenzone and octinoxate became illegal this year in Hawaii. The study, which analyzed water samples collected in 2017, provides state officials with baseline oxybenzone levels in the bay before the COVID-19 shutdown and the implementation of the ban.

This research was conducted by scientists from the National Oceanic & Atmospheric Administration (NOAA), the Spanish Research Council, and Centre National de La Recherche Scientifique, in collaboration with Sorbonne University, the University of Tehran, McMaster University, the Friends of Hanauma Bay, and Haereticus Environmental Laboratory, as well as Hawaii State Senator Will Espero and Hawaii State Representative Gene Ward.