A scheduled sewage release off Los Angeles provided a unique opportunity to study before and after impacts of massive nutrient injection into coastal waters. Researchers hypothesized large, potentially harmful algal blooms (HABs), would result from the discharge. The sewage release was extensively studied by NCCOS scientists, sponsored researchers, and partner agencies, and the results were not expected. 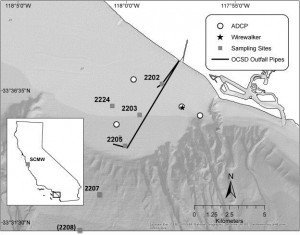 A study of the response of phytoplankton and bacterial growth during the waste-water effluent diversion found that phytoplankton abundance during and after the event did not even reach amounts associated with minor blooms typical of the region. It was possible bacteria consumed most of nutrients, limiting the phytoplankton, while zooplankton grazers feasted on the bacteria and smaller phytoplankton. Enriched effluent chlorination may also have suppressed an algal bloom, as f ield and lab studies show that sewage disinfection by chlorination creates chemical byproducts that inhibit phytoplankton growth.

As for the behavior of the wastewater plume, its position in, and dispersion within the water column, scientists found the special design of the outfall pipe diffuser created complex patterns of mixing and dilution, perhaps limiting the overall response of the phytoplankton.

These and additional research papers from the study will be pooled and published in an upcoming special issue of Estuarine, Coastal and Shelf Science.