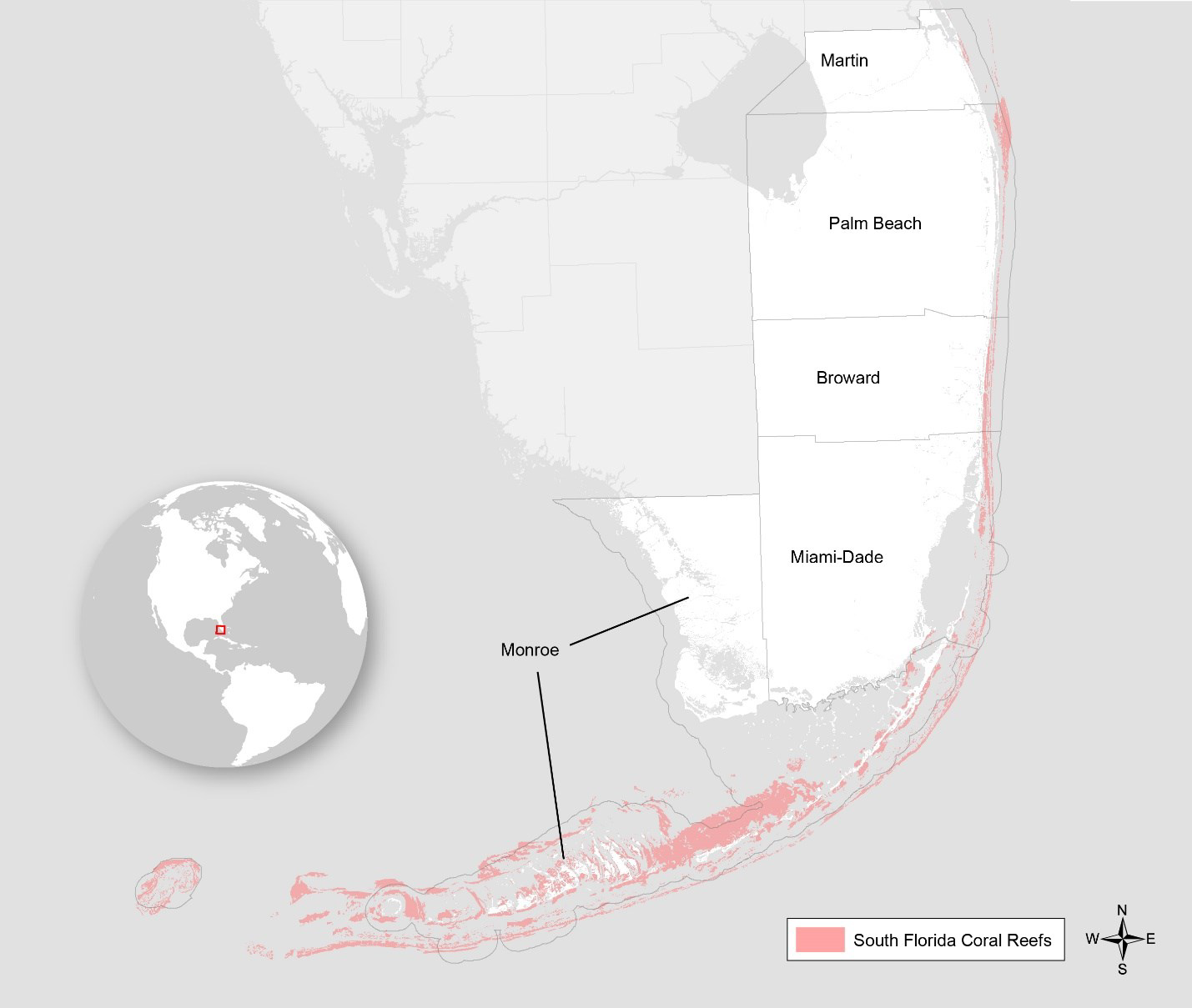 These indicators allow researchers to measure the complex two-way relationship between the environment and humans. In 2019, the team initiated their second monitoring cycle with data collection in South Florida, and recently published a new report summarizing their findings, including a new infographic.

The report outlines current human dimensions information relevant to coral reef resources in South Florida, as well as trends between the first (2014) and second (2019) monitoring cycles, while the infographic focuses solely on 2019 findings. Survey results are representative of residents within each of the five counties adjacent to Florida’s coral reef tract (Figure 1).

Household surveys conducted in April to August of 2019 revealed that South Florida residents generally supported a range of potential marine management policies and regulations, such as efforts to restore damaged coral reefs, stricter control of sources of pollution to preserve water quality, and increased public education on sea level rise and climate change. Survey results determined that coral reefs were perceived to be important to South Florida’s culture and tourism, and revealed that South Floridians’ top three activities continued to be beach recreation (68%), swimming (66%), and boating (43%). Significant increases were seen in resident participation in fishing, snorkeling, island/sandbar recreation, and watersports compared to the 2014 survey.

Awareness of threats to coral reef ecosystems tended to be low among residents of Martin, Miami-Dade, Palm Beach, and Broward Counties, while Monroe County residents were not only more aware of threats, but also more familiar with marine protected areas (MPAs). When examining perceptions of marine resource conditions, residents in 2019 were more certain of their perceptions than residents were in 2014, but their general outlook was that resource conditions, especially coral amount and ocean water quality, had become worse.

These findings offer early glimpses into NCRMP socioeconomic monitoring of South Florida’s coral reefs, and will be used to update indicators that detail the status of South Florida’s coral reef adjacent communities in relation to the other U.S. coral reef jurisdictions. CRCP will use results from this monitoring effort to improve programs designed to protect coral reefs at local, regional, and national levels, as well as to inform continuing research and communication products.