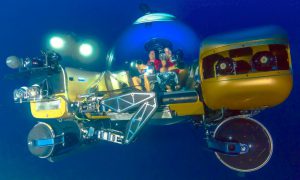 Triton submersibles will serve as the primary means of collecting data from the wreck. Credit:Project Baseline/ Brownies Global Logistics.

Seventy-four years ago, America was in the midst of World War II. On July 15, 1942, German submarine U-576 sank the freighter SS Bluefields, just before the merchant ship convoy and its U.S. military escorts returned fire and sank the U-boat minutes later off of Cape Hatteras, North Carolina. Both the Bluefields and U-576 remained undisturbed until their discovery by NOAA in 2014.

This week through September 5, NOAA and its partners will finally revisit the remains of the two ships in order to document what is now known as WWII's ' Battle of the Atlantic.' Using manned submersibles, researchers will collect data to visualize and recreate the underwater battlefield. Underwater robots and advanced remote sensing technology will generate bathymetric data and detailed acoustical models of the wrecks and surrounding seafloor.NCCOS will primarily work with the acoustic data interpretation related to benthic habitat mapping and fishhabitat characterization.

The expedition team will also explore several other World War I, World War II and Civil War vessels, including the USS Monitor. NOAA is currently considering an expansion of Monitor National Marine Sanctuary's boundaries to increase the protections to the Bluefields, U-576 and other historic shipwrecks. As the only known location in U.S. waters containing archaeologically preserved remains of a convoy battle where both sides are so close together, studying this site will reveal more about the battle, as well as the natural habitats surrounding the shipwrecks

This expedition is a collaboration between NOAA's Office of National Marine Sanctuaries and National Centers for Coastal Ocean Science, and North Carolina Studies Institute. Project Baseline is supplying the GlobalSubDive assets including the research vessel Baseline Explorer, and two manned submersibles. Additional funding to support the mission was provided through a grant from NOAA's Office of Ocean Exploration and Research and the Bureau of Ocean Energy Management. 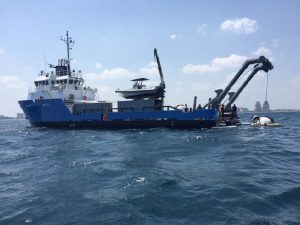 R/V Baseline Explorer will serve as the support vessel and home of the explorers while underway. Credit: Project Baseline/Brownie's Global Logistics.