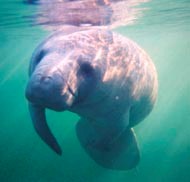 A red tide bloom has persisted in Southwest Florida since October 2017 and recently moved north to the Tampa Bay area. According to the Florida Fish and Wildlife Conservation Commission (FWC), red tide has accounted for about 10 percent of manatee deaths from 2006 to 2016. In 2017, the FWC attributed about 67 out of 538 manatee deaths to red tide. As of October 6, the FWC preliminary estimates are about 182 manatee deaths out of 689 are attributed to red tide. Thus, red tide is a significant threat to the Florida manatee whose status was downgraded only recently from endangered to threatened.  Current research suggests that the toxins produced by red tide blooms can affect immune function in manatees as well as other species. Oxidative stress occurs at the organ, cellular and genetic levels through a specific inhibition of a critical enzyme.

The NCCOS-sponsored ECOHAB project “A Mechanism Based Intervention for Brevetoxin Induced Oxidative Stress” is evaluating the potential for antioxidants to reverse or reduce the effects of brevetoxin-induced oxidative stress. Led by Dr. Kathleen Rein of Florida International University and Dr. Catherine Walsh of Mote Marine Laboratory and Aquarium, manatee and other mammal cell lines are being used as a model system for evaluating effects of antioxidants (e.g., selenium, ascorbic acid and trolox) and the anti-inflammatory agent ketoprofen on minimizing effects of brevetoxin induced oxidative stress.

Results will assess whether antioxidant treatment has the potential to serve as a beneficial treatment protocol for manatees being treated for brevetoxicosis in rehabilitation facilities. The project’s overall goal is to improve treatment options and enhance the success of returning manatees to the wild.