Telepresence Allows Scientist to Join Deep-Sea Exploration from His Desk 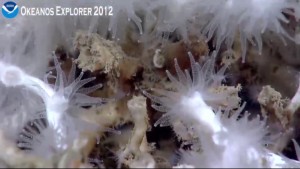 Deep sea Lophelia coral polyps as seen in a closeup screengrab from the ROV Little Hercules.

A deep-sea coral expert from the National Centers for Coastal Ocean Science was one of many scientists from NOAA, academia, and industry invited by the Office of Oceanic and Atmospheric Research to participate in the first deep-sea coral habitatmission broadcast live from the bottom of the Gulf of Mexico.

Throughout March and April 2012, scientists and technicians are investigating deep sea habitats and marine life using remotely operated vehicles as their eyes on the seafloor. Communicating via video streams, chat rooms, FTP sites, emails, and conference calls akin to NASA's Mars rover missions, that 'Doctor on Call,' Peter Etnoyer, worked from his office in Charleston, SC, to identify corals whenever ROVs controlled from the NOAA Ship Okeanos Explorer encountered them.

OAR's Office of Ocean Exploration and Research is leading this scientific cruise. Viewers can follow along in real time at NOAA's Ocean Explorer website.

See also:The Measure of a Coral