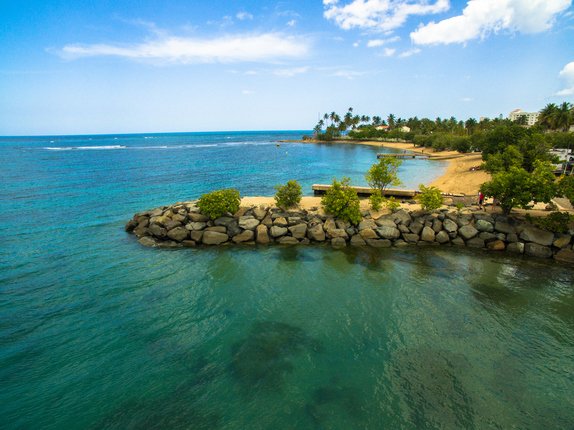 After the contaminants were identified, NCCOS, with support from NOAA’s Coral Reef Conservation Program, determined their extent and magnitude, conducted preliminary source tracking, and then recruited academic partners to investigate the potential human health impacts. Studies from the University of Miami show elevated levels of PCBs in bay sediment, fish samples, and blood samples from Guánica residents.

The Ochoa Fertilizer Co. site in Guánica, Puerto Rico consists of two parcels totaling 125 acres adjacent to Guánica Bay. Ammonia, ammonium sulfate and sulfuric acid were manufactured at the plants from the 1950s until 1968. These operations resulted in releases of untreated waste, contaminating soil and entering the Bay where it poses a threat to corals, fish, and aquatic life. There is a potential risk of exposure to nearby residents from soil contaminated with mercury, lead, and PCBs. Fertilizer manufacturing on the 13-acre lot has continued to the present day.

The Superfund includes the nation’s most serious uncontrolled or abandoned releases of contamination. Listed sites are prioritized for EPA Superfund cleanup funding and enforcement actions.  EPA adds sites to the list based on a scientific determination of risks to people and the environment, consistent with the Comprehensive Environmental Response, Compensation, and Liability Act and the National Oil and Hazardous Substances Pollution Contingency Plan. Superfund cleanups provide health and economic benefits to communities. The program is credited for significant reductions in both birth defects and blood-lead levels among children living near sites.

The Puerto Rico Department of Natural and Environmental Resources supports the inclusion of the site to the Superfund NPL. For information about Superfund and the NPL, please visit: https://www.epa.gov/superfund. EPA’s press release on the Superfund site designation is here.