This ESP (referred to as 'ESPfriday') will be deployed for the first time in Puget Sound beginning in early August and will generate autonomous, near real-time measurements of particulate DA concentration, as well as gene probe-based quantification of potentially toxic Pseudo-nitzschia cells over a three-week period. DA production by Pseudo-nitzschia can vary with environmental conditions; therefore, quantification of cell and toxin levels is needed to provide an accurate picture of changes in bloom toxicity and thus the potential for impacts to shellfish resources as well as human and animal health. 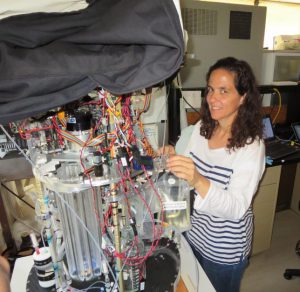 ESPfriday was retrofitted with the DA sensor and incorporated into a new mooring design as part of a collaborative effort funded in part by NOAA's Integrated Ocean Observing System (IOOS) Marine Sensor and Advanced Observing Technology Transition program. This project (Operational Ecological Forecasting of Harmful Algal Blooms in the Pacific Northwest using an Environmental Sample Processor), led by the University of Washington, will also support the first offshore deployment of ESPfriday in Washington state waters (Spring 2016) near the Juan de Fuca eddy. This oceanographic feature has been identified as a source for toxic Pseudo-nitzschia populations that can cause DA contamination of shellfish (e.g., razor clams) along the Washington coast. The ESP's location near the Juan de Fuca eddy was selected with the aim of providing an early warning of potential DA toxicity to coastal managers and public health officials. 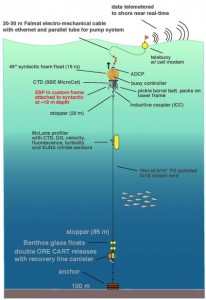 Washington state, along with the entire West Coast, has experienced an unprecedented harmful algal bloom (HAB) event this year related to DA-producing Pseudo-nitzschia. Advancing the ability to provide near real-time data on HAB cell and toxin levels via ESP deployments now and in the future will not only help to provide early warning of resource contamination, but in combination with physical and chemical data from regional ocean observing systems (e.g., NANOOS ) can support predictive models needed to forecast Pseudo-nitzschia blooms and impacts in the Pacific Northwest.