Reef fish spawning aggregations are very challenging to study. They occur during specific times of the year for as few as 1 to 10 consecutive nights. For many species this is somewhat predictable, occurring around full moons a couple of months a year. But which month? And will they aggregate every night around the full moon? And (most challenging), where? Searching for new fish spawning aggregations can be very costly, considering the manpower and ship resources needed to visit these sometimes remote sites for many consecutive days around the full moon. This doesn't even consider the possibility that multiple species may aggregate on the same night but in distant locations. Researcher need to be everywhere at the same time.

Autonomous underwater vehicles (AUVs) may give us the ability to be in many places at once. AUVs are underwater robots that can be programmed to survey remote areas without intervention by researchers or without the need for large ships (unlike a remotely operated vehicle, or ROV). Through a partnership with the Naval Oceanographic Office in Stennis, Miss., we were able to bring along a Slocum ocean glider for this mission to St. Croix. The ocean glider uses pumps and internal weights to change buoyancy and attitude and a pair of large wings allow the 4-foot long, torpedo-shaped vehicle glide and undulate through the water column. Gliders are used worldwide to measure properties of the ocean to better understand ocean currents, ocean productivity, and climate change.

On this glider we attached an underwater sound recorder that is recording sounds made by fish, marine mammals, and man made sounds like ships. Many species of reef fish make sounds during spawning behavior, thought to be forms of communications between members of a species to signal spawning. The sounds made by the fish are different with each species. We are using the sounds produced by fish to pinpoint the area where aggregations may occur. We will use the data to design future surveys to confirm the aggregations and study them further.

The glider is programmed with a series of waypoints that it will follow when it surfaces and using the position it receives from GPS satellites and piloted by a glider operator at the Naval Oceanographic Office. The path will take the glider over reported spawning aggregation sites in and around the Red Hind Marine Conservation District on the east end of Lang Bank, St. Croix.

Advanced technologies still come with some risk
We were tracking the glider at every surfacing from emails sent to the ship every time the glider was on the ocean surface. And then an ominous email was received early Friday morning 'Glider ng001: Glider ABORT." Diagnostics received by satellites and analyzed by the Navy suggested a failure in one of the buoyancy pumps. The glider ejected one of its weights and was adrift at the surface. We were able to follow the glider as it drifted over Lang Bank and were making plans to retrieve it using one of the small boats on the Nancy Foster. A small fishing boat beat us to it, lending a hand and delivering the glider to the ship. Unfortunately, it is not possible to repair the glider on the ship, marking the end of this very short scientific journey to better understand reef fish spawning aggregations. 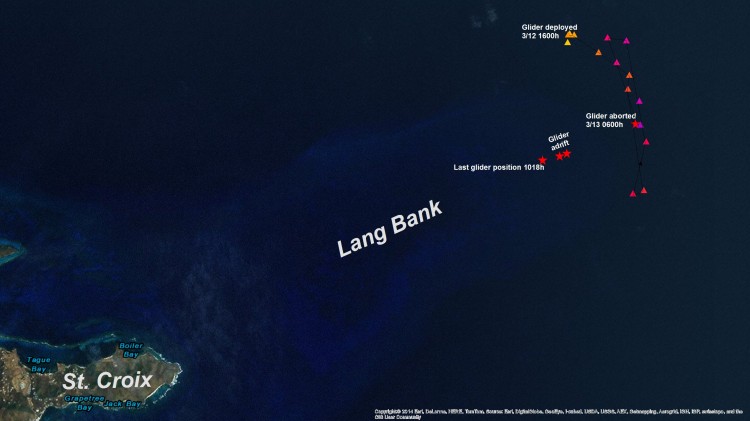 Despite the challenges we experienced on this mission, we predict increasing the use of gliders and other AUVs to assist with our research on reef fish spawning aggregations and oceanography in coral reef ecosystems.